Beta and bolt hangers: An Actor-Network approach to storying the Niagara Escarpment 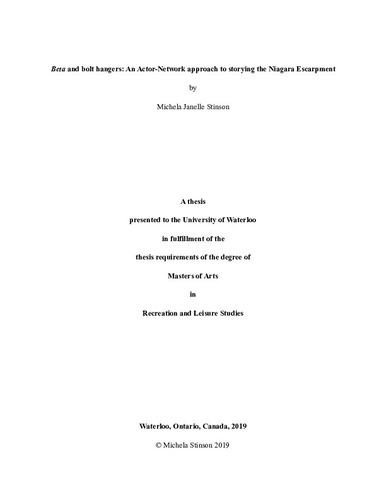 Rock climbing is a messy practice that assembles dynamic landscapes, discursive regimes, processes of defacing, and the interferences of diverse more-than-humans (Barratt, 2012; Rickly, 2017; Rossiter, 2007). This thesis engages Actor-Network Theory to illuminate how the bolt hanger operates as a material-discursive token beyond the signification of a specific climbing route—as a representation of local ethics, a prompt of affect, and a delineation of territory. In their material manifestations, bolt hangers are employed within the practice of sport climbing as permanent fixtures to which climbers affix protective equipment. The placement of bolt hangers therefore interacts with practices of safety, route-finding, and beta: the sequence of movements unique to completing a climbing route (Phillips et al., 2012). Beta is further established, reinforced, and resisted through climbing practice in abundant, material-discursive ways. Orderings of beta are thus considered a more-than-human, relational configuration (Ness, 2011). In this context, beta becomes an entanglement of affect, ethic, and territory as sport climbing is recursively ordered. This thesis ultimately considers the material-discursive beta contained within the bolt hanger, and how the bolt hanger signifies a certain defacing of false binaries of human/nonhuman and nature/culture as it moves to translate the many tourismscapes of the Niagara Escarpment (Barad, 2007; Barratt, 2012; Rossiter, 2007; van der Duim, 2007).