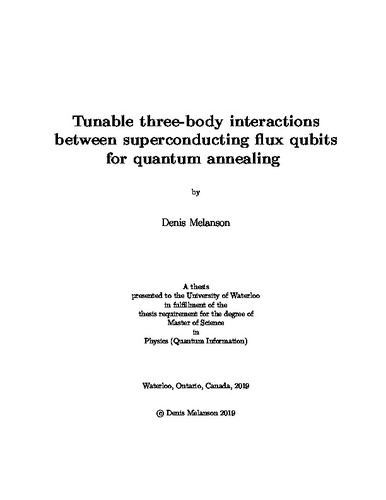 The field of quantum information has been a fast growing field of research in the last few decades. The reason for this development is the potentially immense power of quantum computers, capable of solving hard problems in a fraction of the time it would take a classical computer. Quantum annealers are a type of quantum computer that seek to solve computational problems by finding the ground state of a quantum system. This type of quantum computer has been implemented on a large scale using superconducting flux quantum bits, but the computational power is limited. One potential improvement to help in this context is the implementation of multi-body interactions between quantum bits. Many-body interactions would be useful in allowing quantum annealers to solve more complex problems that are relevant in various areas of quantum information and science and implementing quantum error correction. We present a superconducting device that implements a strong and tunable in sign and magnitude three-body interaction between superconducting flux quantum bits. The circuit design proposed has vanishing two-body interactions and robustness against noise and parameter variations. This circuit behaves as an ideal computational basis ZZZ coupler in a simulated three-qubit quantum annealing experiment. These properties are confirmed by calculations based on the Born-Oppenheimer approximation, a two-level spin model for the coupling circuit, and full numerical diagonalization. The proposed circuit is based on already available technology and therefore could be readily implemented in the next generation of quantum annealing hardware. This work will be relevant for advanced quantum annealing protocols and future developments of high-order many-body interactions in quantum computers and simulators.