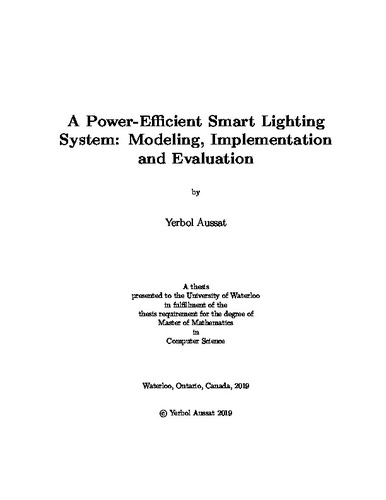 Lighting load accounts for approximately one third of overall energy consumption in modern office buildings. To reduce this load, we have designed a smart lighting control system that attempts to minimize power consumption, while simultaneously increasing occupant comfort, by dynamically accommodating heterogeneous illuminance requirements as well as changes in occupancy. Most current daylight-harvesting lighting systems measure lighting levels at the luminaires or at the walls to deduce illuminance on work surfaces. However, this computation is prone to error, which can potentially result in compromised user comfort. Instead, our system measures illuminance and occupancy directly from sensors located at each work station. It uses sensor readings to dynamically estimate the relationship between the dimming level of each luminaire and the illuminance at each work station using an unobtrusive calibration process. Subsequently, a linear-programming-based adaptive control algorithm determines power-efficient and comfort-preserving dimming levels for each luminaire. Plug-and-play design lets us seamlessly connect and disconnect system components, such as additional luminaires and sensing modules, even while the system is in use. Based on the deployment of our system in a real office environment, we demonstrate that it maintains the desired illuminance at work surfaces despite environmental fluctuations. We also show, through extensive simulations using 7 months of collected daylight and occupancy data, that our system substantially reduces energy consumption compared to even an occupancy-aware LED lighting system.