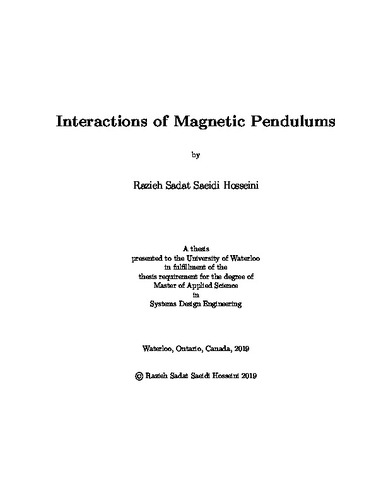 In recent years, coupled magnetic oscillators have received remarkable attention due to their application in vibration energy harvesting techniques and also its promising ability to help researchers to have a better understanding of atoms in a lattice behaviour. Energy harvesters scavenge ambient vibration energy and convert it into useful electrical energy. According to previous studies nonlinear mechanical attachments have received significant interest as the basis for energy harvesting systems. Another substantial field that coupled nonlinear oscillators and specifically coupled magnetic oscillators may play a crucial role in is atomic physic. Due to the qualitative similarity of the magnetic field and the electromagnetic field governing the atoms in the lattice structure in crystalline solids, investigating the coupled magnetic oscillators could help researchers to better perceive the lattice behaviour. In this thesis, a chain of two-dimensional magnetic pendulums using an ideal point mass model as well as a rigid body model of a pendulum is investigated. The pendulums proposed in the model are to simulate the vibration of atoms in the lattice structure of crystalline solids and the attached magnets are chosen to represent the electromagnetic field governing the atoms. The nonlinear dynamics of the models through the interaction forces between the magnets has been investigated. With the aim of demonstrating the dynamics of the system completely, the equations of motion of the pendulum magnets have been analytically derived and by linearizing the equations of motion, the natural frequencies of the system have been found. The behaviour of the simulated system has been examined experimentally to assure the accuracy of the analytical approach. To achieve the intent, a simple experimental setup consisting of an array of two coupled magnetic pendulums has been introduced. Ultimately, the equations of motions of a rigid body model including the determined magnetic forces have been numerically solved and the nonlinear response of the system along with the equilibrium points and the system's frequency have been validated experimentally. The results obtained through comparing the simulated system response and the designed experiment response indicates that the simulated model can predict the behaviour of such system in reality.