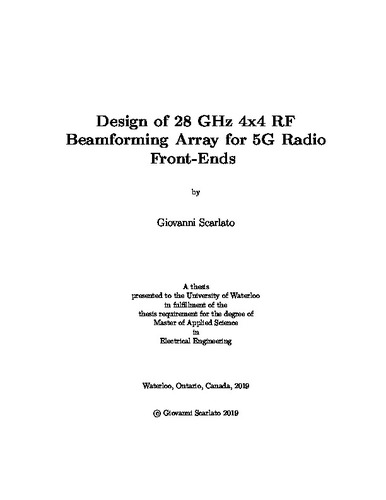 Current state of wireless infrastructure sees mass migration to higher frequencies as much of the already used spectrum is insufficient in supporting the influx of numerous users and various data intensive mobile applications. Data rates are projected to increase by an order of magnitude and harnessing the necessary bandwidth below 6 GHz is not feasible. A move to higher frequencies sees not only increased fractional bandwidth, but also significantly enhanced antenna apertures as a result of beamforming capabilities. Due to device level complications with frequencies nearing the unit gain frequency of transistor technology, high output power is seldom found, and in conjunction with severe path loss, communication links cannot be established without the usage of antenna arrays. Phased array systems offer significant upside to the traditional array implementation as it permits reconfigurable directive communication. However, Ka-Band phased arrays still struggle to arrive at a reasonable tradeoff between design complexity, cost and performance. With a divide between both organic and printed circuit board (PCB) based approaches to the development of an antenna-in-package (AiP), this thesis sides with the latter. An antenna-on-PCB variant of the AiP is developed, which implements both commercially available RF laminates and RFIC front end modules to produce a 28 GHz 4x4 RF beamforming phased array that is found to exhibit extremely low loss (-0.66 dB), adequate scan volume (+/- 45 degrees, in E and H planes) and large bandwidth (3 GHz) for a single layer, non-isolated patch antenna design. Unit cell, infinite array analysis is emphasized and lattice resizing is leveraged to obtain desired scan performance, while significantly reducing design complexity via the absence of intricate isolation enhancement techniques. In an effort to aid in application based design, the AiP is extended to application of linearization where it is found that the inclusion of dummy elements along the perimeter of the package not only serve as element pattern enhancement, but also provide reliable means of output signal capture. Negating the traditional transmitter observation receiver (TOR) architecture, the AiP design as a TOR for millimeter-wave communication proves optimistic in the quest for maximum system efficiency.