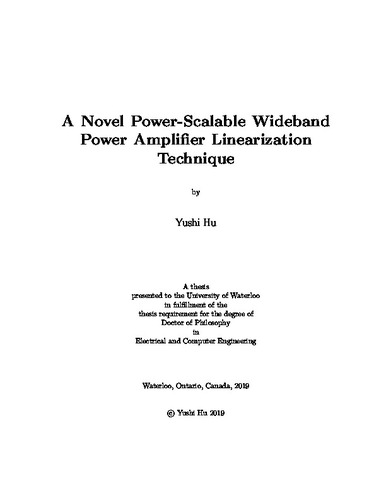 Global mobile traffic is expected to continue to increase at an astonishing rate in the future, due to the ever-increasing number of mobile phone subscribers and the adoption of smart devices which generate significantly more mobile traffic. To satisfy this growth in demand, it is envisioned that future 5th Generation (5G) mobile networks will utilize lower powered small-cell base stations and base stations with large antenna arrays to greatly improve network coverage and capacity. A power amplifier (PA) is a critical component in a base station’s transmitter, required to boost the signal power such that it is high enough for transmission to the intended receiver. The design of the PA for 5G base stations, however, presents new challenges to designers. When driven with modern wideband communication signals, the PA must be both efficient and linear in order to minimize power consumption, improve reliability, maintain transmission accuracy, and avoid interference with neighbouring signals. In conventional high-powered macrocell base station designs, the aforementioned requirements are usually satisfied using a two-step procedure. First, the PA is designed using a Doherty power amplifier (DPA) topology, which has high efficiency, but poor linearity. Then, digital predistortion (DPD) linearization techniques are applied to ensure that the DPA attains the required linearity performance. However, for the lower-powered PAs needed in small cells and large antenna arrays, the relatively high power overhead of DPD techniques, which does not scale down as the power range of the PA decreases, make them unattractive PA linearization solutions. In response, a new PA linearization technique is proposed and developed in this thesis. It is based on the design and addition of a linearization amplifier (LA), an approach which can help the PA attain the required linearity even when it is driven with modern communication signals with very wide bandwidths. Of particular note, the LA’s power consumption is relatively low, it scales with the PA’s power range, and it does not increase with signal bandwidth. These qualities make it highly suitable for use with PAs in future 5G small-cell base stations and base stations with large antenna arrays. To validate the proposed technique’s effectiveness, a prototype circuit was designed, fabricated and applied to a high peak efficiency 6 W class AB PA with a centre frequency of 850 MHz. When stimulated by a wideband 40 MHz signal, the PA’s adjacent channel leakage ratio (ACLR) was improved by up to 13 dB after the addition of the LA. This enabled the PA to achieve an ACLR of about -45 dBc without the use of any other linearization techniques. Significant ACLR improvements were also observed for signals with even wider bandwidths of up to 160 MHz. Moreover, it was shown that the LA could be used in conjunction with a simple predistorter to further improve the efficiency and linearity of the class AB PA. Next, the LA is augmented with a conventional DPA design to form a new linear DPA topology that was able to achieve a better linearity-efficiency trade-off compared to the linearized class AB PA. To accomplish this, a study of the interactions between the LA and DPA circuitries was conducted and a design strategy was developed to determine the circuit parameters that maximized ACLR improvement while minimizing power consumption. For validation purposes, this strategy was applied to design a proof-of-concept prototype with a centre frequency of 800 MHz and a peak envelope power of 12 W. With the addition of the LA, a more than 11 dB improvement of the ACLR was obtained at the prototype’s output when it was driven with signals with up to 40 MHz of modulation bandwidth: an ACLR of about -45 dBc or better was achieved over wide average power range. As expected, the efficiency of the linear DPA topology remained significantly higher than the linearized class AB PA for all signals tested. Another challenge faced in particular by PAs in a large antenna array, is that it will experience dynamic load impedance variations due to antenna coupling. This unwanted variation in the load impedance can cause instability and significant distortions at the output of the PA that is difficult to remedy using conventional techniques. To address these issues, it is shown in the last part of this thesis that the LA can be used to mitigate this problem by minimizing the amount of load impedance variation seen by the PA due to antenna coupling, such that it remains closer to its optimal value, and by maintaining excellent linearization across a wide range of load impedance values.