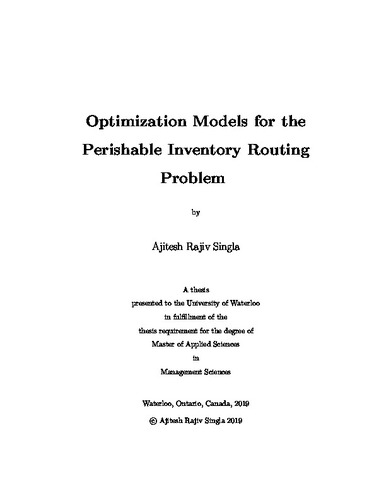 In this thesis, three models for the Perishable Inventory Routing Problem (PIRP) are explored. The first model of the inventory routing problem considers one perishable product and known (deterministic) demands in the context of consignment inventory. The objective of the problem maximizes the profit of the supplier who owns all the inventory until it is sold. The supplier gives a fixed percentage discount on the selling price of the product as it deteriorates. The shelf life and the number of vehicles used in this problem is also fixed. Computational results, comparing the PIRP with the standard Inventory Routing Problem (IRP), are presented. Based on the calculations using the branch-and-cut algorithm, we conclude that adding perishability to the IRP leads to better inventory management as a result of which fresher products are delivered to the customers. The PIRP model is also solved using the Benders Decomposition algorithm. The results indicate that in the above stated problem, the branch-and-cut algorithm yields better results as compared to the Benders Decomposition algorithm. The second model extends the PIRP to consider uncertain (stochastic) demands (SPIRP). This is done to make the model comparable to a real-life problem. Several demand scenarios are created within a fixed range to capture the uncertainty with respect to the perishable product. Since estimating the actual probability is difficult, a large number of equally probable demand scenarios are assumed. The model was run on the branch-and-cut and the Benders Decomposition algorithm. The results generated were then compared. It was inferred that even when demand scenarios enable easy decomposition of the problem, the Benders algorithm performs worse than the branch-and-cut algorithm. In the third model, the robust formulation of the SPIRP is proposed to resolve the above-mentioned limitations. Robustness was added to the SPIRP to enable the use of a small number of scenarios to obtain solutions that are competitive with modeling a large number of scenarios in the case of SPIRP. An innovative way of formulating the robust counterpart of the SPIRP was developed while keeping the probability of each demand scenario uncertain. An algorithm was devised to compare the effectiveness of the robust model to the deterministic and stochastic models. Computational results compare the average profit values generated by the three models. It is concluded that while the deterministic model captures no uncertainty, the stochastic model with many scenarios accounts for the most demand uncertainty; the robust model, through the use of far fewer scenarios, can account for a significant uncertainty in demand. Another interpretation of the results is that an increased number of robust scenarios has a significant effect on the average profit values of that model.