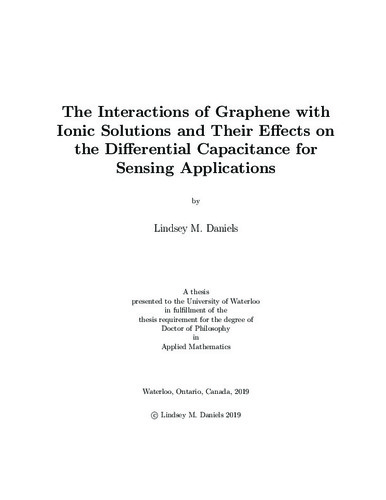 Nano-scale devices continue to challenge the theoretical understanding of microscopic systems. Of particular interest is the characterization of the interface electrochemistry of sensors, which operate as field effect transistors with graphene in contact with the solution. While plenty of experimental research has been conducted in regard to the viability and sensitivity of graphene-based devices, the understanding of the microscopic and macroscopic physics of these sensors has lagged, unlike any other areas of applications for graphene. Although some successful models of these sensors have been developed, relatively little theoretical work to account for the vast extent of experimental work. Typically operated in a regime of high ion concentration and high surface charge density, dielectric saturation, dielectric decrement, and ion crowding become non-negligible at the interface, complicating continuum treatments based upon the Poisson-Boltzmann equation. Modifications to the standard Poisson-Boltzmann theory are explored, with modifications due to dielectric saturation and dielectric decrement considered in tandem with a Bikerman-Friese model to account for the steric effects of ions. In the case of dielectric saturation, a model proposed by Booth is used to characterize the diffuse layer capacitance for both metallic and graphene electrodes immersed in an electrolyte. The dependence of the diffuse layer capacitance on the surface charge density of the electrode exhibits two peaks, in contrast to the experimental results. For dielectric decrement, a dielectric permittivity dependent on the concentration of positive and negative ions is used to determine the diffuse layer capacitance for both metallic and graphene electrodes. The diffuse layer capacitance shows a strong interplay between ion polarizability and steric effects, while exhibiting a single peak. A self-consistent and parameter-free method for the inclusion of a Stern layer is used in both cases, which eliminates the spurious secondary peak in the case of dielectric saturation and reduces the overall magnitude of the capacitance of the diffuse layer in both dielectric saturation and dielectric decrement. When a graphene electrode is used, the total capacitance in all modifications is dominated by V-shaped quantum capacitance of graphene at low potentials, which is a manifestation of the Dirac cone structure of the graphene $\pi$-electron bands. A broad peak develops in the total capacitance at high potentials, which is sensitive to the ion size at dielectric saturation, but is stable with dielectric decrement. In addition to the interactions of graphene with an electrolyte, considerable interest has recently been shown in studying the electric double layer that arises at the interface of doped graphene and a class of electrolytes known as ionic liquids. Ionic liquids are a class of molten ionic salts at room temperature that have low volatility and high ionic concentration, and are characterized by the overscreening and overcrowding effects in their electric double layer. A mean field model for ionic liquids is presented, which takes into account both the ion correlation and the finite ion size effects, in order to calculate the differential capacitance of the ionic liquid interface with single-layer graphene. Besides choosing ion packing fractions that give rise to the camel-shaped and bell-shaped capacitances of the diffuse layer in ionic liquids, the regimes of ``dilute electrolytes'' and asymmetric ionic liquids are considered. As in the case of electrolytes, the main effect of a graphene electrode arises due to its V-shaped quantum capacitance. As a result, the total capacitance of a graphene--ionic liquid interface exhibits a camel-shaped dependence on the total applied potential, even for large ion packing fractions and finite ion correlation lengths. While the minimum at the neutrality point in the total capacitance is``inherited” from the quantum capacitance of graphene, the two peaks that occur at applied potentials of $\sim \pm1$ V are sensitive to the presence of the ion correlation and a Stern layer, which both tend to reduce the height and flatten the peaks in the camel-shaped total capacitance. It is also determined that the largest fraction of the applied potential goes to charging the graphene electrode. When considering the sensitivity of graphene-based sensors to ion concentration and/or pH of the surrounding environment, a site binding model which allows hydrogen and hydroxyl groups to adsorb onto the surface of the device is proposed. Both a regime in which bare graphene is exposed to the electrolyte and a regime where a functionalized oxide, which contains a density of charged impurities to facilitate ion binding, is situated between graphene and the electrolyte are proposed. With regard to the dependence on ion concentration, comparisons between the model and experimental data show good agreement when the finite size of ions is included in the electrolyte. In the case of pH dependence, comparisons between the model and experimental data show excellent agreement, particularly when steric effects are included in the electrolyte. The favourable comparisons here are the first steps in developing a comprehensive model of graphene based biological and chemical sensors.

Lindsey Daniels (2019). The Interactions of Graphene with Ionic Solutions and Their Effects on the Differential Capacitance for Sensing Applications. UWSpace. http://hdl.handle.net/10012/14981