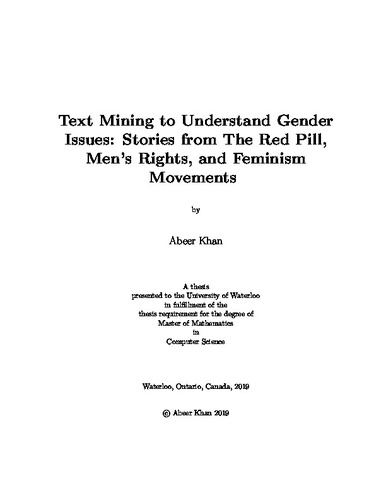 Addressing gender issues has become important worldwide. The United Nations (UN) endorses big data projects as a valuable tool to monitor its gender-related development goals. In this thesis, we first motivate the examination of The Red Pill, Men's Rights, and Feminism movements to identify gender issues. We present data-mining methodologies to analyze over 40,000 posts and 2 billion comments that were made on social media in relation to these social movements. Specifically, we examine the themes these movements discuss and their perspectives on them. We also analyze the people involved with these movements, by comparing their discussions and interests with other online communities. Our analysis leads to three main findings. First, gender movements discuss workplace sexism, personal safety, rape, and legal issues among other gender issues, and different movements often have different perspectives on these issues. Second, people involved with the Men's Rights movement are similar to people who are politically right-leaning and associated with sexist or racist content, whereas people involved with the Feminism movement are similar to those who are politically left-leaning, support minorities, body acceptance, and survivors of sexual assault. Third, people involved with The Red Pill movement are similar to those who do not believe in the egalitarianism of race or gender. We obtain insights beneficial to entities affected by gender issues, such as governments, and international organizations such as the UN Women.