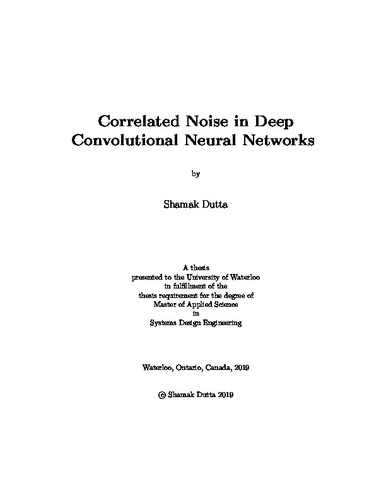 This thesis explores one of the differences between the visual cortex and deep convolutional neural networks, namely, correlated fluctuations of neuron response strength. First, we describe the similarities and differences between biological and artificial neural networks and provide motivation for bridging the gap between the two, with a focus on correlated variability. Next, we present a regularisation method for convolutional neural networks using correlated noise. The structure of the correlations are inspired from biological observations using two factors: spatial extent and tuning similarity of neurons. We provide empirical results on improved robust image classification in the setting of occluded and corrupted images. We then move on to studying the connection between popular dataset augmentation techniques and correlated variability. We compute a smooth estimate of the correlations of neural network activity as a function of distance and kernel similarity, and show the similarity to biological correlations. Finally, we introduce a structured form of Dropout for convolutional neural networks, taking into account spatial and kernel correlations. We show improvement in image classification for the VGG architecture on the CIFAR-10 dataset.