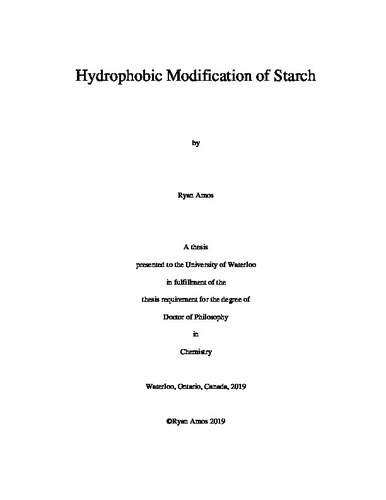 Starch is a very common polysaccharide with multiple applications in the industry, but the range of physical properties exhibited by that material is relatively limited due to its strongly hydrophilic character. The work reported in this Thesis mainly concerns the development of synthetic methods for the chemical modification of starch, either in the nanoparticle or cooked forms, with different reactive hydrophobic reagents, under conditions including solution, slurry, melt mixing and reactive extrusion, so as to introduce amphiphilic character in the materials. Starch nanoparticles (SNPs) were modified with hexanoic and propionic acid anhydrides in the presence of pyridine and 4-dimethylaminopyridine (DMAP) in dimethyl sulfoxide (DMSO) as solvent. A reaction efficiency (RE) of 100% was achieved over the entire degree of substitution (DS) range tested for both anhydrides and SNPs of different sizes. The integrity of the products was maintained, as the reaction conditions used did not lead to fragmentation of the starch and the addition of hydrophobic microdomains did not influence the Dh of the SNPs. Polyurethane prepolymers (PUPs) were synthesized from castor oil and toluene diisocyanate (TDI) without solvent at an OH:NCO ratio of 1:2. Full conversion of the hydroxyl groups was achieved, even at this low OH:NCO ratio. The castor oil PUPs were used to cross-link and add hydrophobic microdomains in thermoplastic starch (TPS) without organic solvents or catalysts in a melt mixer. The reactions proceeded with high overall RE, which would make further purification of the products unnecessary for most applications. The reaction between the starch hydroxyl and the isocyanate groups formed no by-products, with 100% atom economy. The maleation of raw linseed oil and soybean oil was completed in a benchtop pressure reactor, while reactions with soybean oil were also completed using a benchtop open glass reactor or a pilot plant scale open glass reactor. In contrast to soybean oil, the maleation of linseed oil led to extensive cross-linking. Soybean oil products were synthesized containing up to 2.6 anhydride units on average per triglyceride. Gel permeation chromatography (GPC) analysis indicated that the sealed reactor approach led to significant oligomerization, while products from both open reactor methods were predominantly isolated triglycerides. A procedure was developed to determine the weight fraction of unreacted triglycerides in the maleated oil. Hydrophobic starch esters were successfully prepared by reacting cooked starch with different cyclic anhydrides including octenyl succinic anhydride (OSA), dodecenyl succinic anhydride (DDSA), a maleated fatty acid (TENAX 2010), phthalic anhydride (PA), trimellitic anhydride (TMA), and maleated soybean oils (MSOs) in slurry reactions and in a melt mixer. Finally, hydrophobic modification by reactive extrusion was completed using DDSA, TENAX 2010, and MSO. For reactions in the dispersed phase, the RE was above 80% regardless of the anhydride loading, except for samples with high loadings of DDSA and maleated soybean oil. Reactions completed in a melt mixer with a base had a higher RE than reactions without base for all anhydride loadings. For reactive extrusion, the RE increased with the hydrophobicity of the anhydride. Reactive extrusion proved to be most advantageous to produce hydrophobically modified starch in an environmentally friendly and scalable way, with REs high enough to make purification of the products unnecessary for most applications. The results obtained show that the hydrophobic modification of starch can be achieved efficiently, using a wide range of hydrophobic reagents and reaction conditions.