Kylie Jenner and Her Instagram Audience: A Lacanian Cultural Analysis 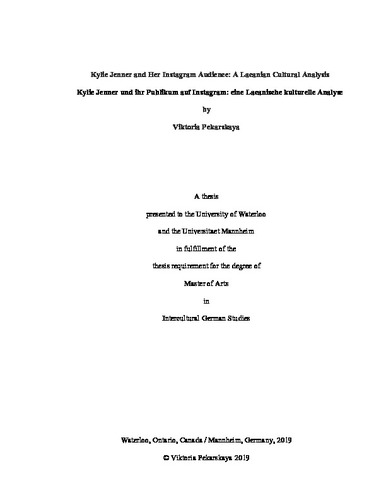 This thesis aims to examine the perception of female gender on Instagram by utilizing a conceptual framework based on the Mirror Stage theory of Jacques Lacan. Taking Kylie Jenner’s Instagram profile as an example of virtually-constructed female gender representation, I will describe the Instagram mode of operation and its cultural and social implications for users’ identity formation processes. I will analyze four positively and three negatively assessed Instagram posts by Kylie Jenner. Guided by Lacanian terms and concepts, I will investigate the behavioral and emotional patterns of Kylie Jenner and her followers on Instagram, providing insights into the specificities of gender, race, and class performance in the context of new media. By means of a qualitative analysis of the comments section, I have divided Kylie Jenner’s Instagram posts into two categories. The first entails images of Kylie presenting herself in a traditional female role as a mother, sister, daughter, or beauty-oriented woman. The second comprises all image deviations from that traditional feminine representation, including Kylie as an entrepreneur, billionaire, and car lover. In the subsequent analysis, I will compare followers’ reactions to both categories by studying 500 randomly chosen comments for all seven selected posts. I will calculate the number and proportion of positive, negative, conversational, neutral, international, and Like Back comments in order to place the posts on a gradual scale and trace correlations between the position of the post on the scale, its femininity level, and its function as an object of self-identification. I will argue that followers tend to show more approval when Kylie presents herself in a traditional female role. The posts in which Kylie occupies gender-unmarked or masculine interests are expected to initiate concern, negative emotions, and fierce debate in the comments section. The posts that conform to the “feminine” domain, on the contrary, are usually better assessed and less discussed. Moreover, I will aim to prove that Kylie Jenner’s negatively assessed content tends to dilute race and gender dichotomies.