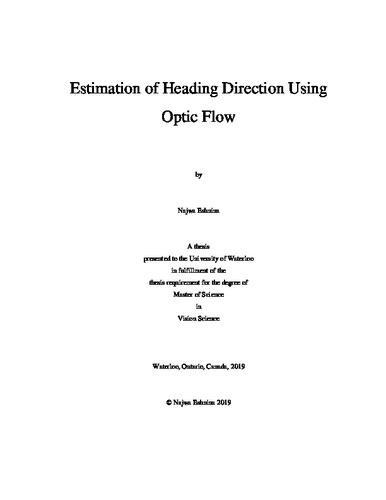 Background The purpose of this study was to investigate the effect of the reduction of the uniocular light luminance as well as the effect of unequal retinal image sizes by using uniocular size lenses, on the heading direction judgment using optic flow stimuli. We hypothesized that the accuracy for perceived heading direction will be reduced with use of neutral density filters and size lenses. Also, we further hypothesized that bias in directional heading may be induced by using uniocular neutral density filters or size lens. Methods Optic flow stimuli were used to simulate the direction of focus of contraction. The stimuli consisted of a number of white dot presented on a uniform background. The number of the dots was set to 75 dots or 20 dots positioned randomly and contracting to a focus with two reference speeds, namely 2 and 8 degrees per second. The stimuli were presented on a computer screen at eccentricity of +1o, -1o from a central fixation line. Eighteen adults (22- 41 years of age) participated in these experiments. Thirteen participants had neutral density (ND) filter over the right eye and five participants had a 5% size lens over the right the eye. The participant’s task was to identify the direction of focus of contraction (left or right) by using the appropriate keypad. Results The results showed that the accuracy was best with the higher dot speed (P = 0.029) and there were no interactions between all other stimulus variables. Decreasing the light luminance monocularly with an ND filter did not significantly impact the participant’s accuracy in judging the direction of focus of contraction. No statistically significant differences in accuracy were found in direction judgment with 1 log unit or with 1.5 log unit and without ND filters. However, with introducing a 5 % size lens over the right eye, the participants’ accuracy has significantly declined. No significant directional bias was observed neither with neutral density filter nor with size lenses. Conclusion Monocular reduction of the light luminance did not affect the accuracy of the perception of focus of contraction of optic flow. However, size differences of the retinal image produced by a size lens significantly reduced the accuracy of judging of focus of contraction of optic flow. There was no bias in the directional responses