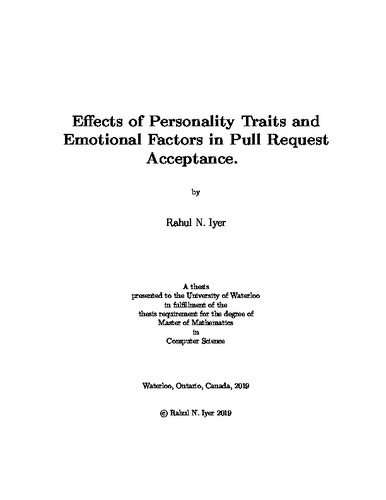 Social interactions in the form of discussion are an indispensable part of collaborative software development. The discussions are essential for developers to share their views and to form a strong relationship with other teammates. These discussions invoke both positive and negative emotions such as joy, love, aggression, and disgust. Additionally, developers also exhibit hidden behaviours that dictate their personality. Some developers can be supportive and open to new ideas, whereas others can be conservative. Past research has shown that the personality of the developers has a significant role in determining the success of the task they collaboratively perform. Additionally, previous research has also shown that in online collaborative environments, the developers use signals from comments such as rudeness to determine if they are compatible to work together. Most of these studies use traditional small-scale surveys for their experiments. The transparent nature of online collaborative environments makes it easier to conduct empirical experiments by mining pull request comments. In this thesis, first, we investigate the effect of different personality traits on pull request acceptance. The results of this experiment will provide us with a valuable understanding of the personality traits of developers and help us develop tools to assist developers. We follow it with a second experiment to understand the influence of different emotional factors on pull request decisions. The emotion expressed by a developer on their teammates can be influenced by social statuses, such as the number of followers. Moreover, the teammate's team status, such as team member or outside contributor too, can influence the emotional effect. To understand moderation, we investigate different interaction effects. We start the experiment by replicating Tsay et al.'s work that examined the influence of social factors (e.g., `social distance') and technical factors (e.g., test file inclusion) for evaluating contributions. We extend their work by augmenting it with personality traits of developers and examining the influence of on the pull request evaluation process in GitHub. In particular, we extract the `Big Five' personality traits (Openness, Conscientiousness, Extraversion, Agreeableness, and Neuroticism) of developers from their online digital footprints, such as pull request comments. We analyze the personality traits of 16,935 active developers from 1,860 projects and compare their relative importance to other non-personality factors from past research, in the pull request evaluation process. We find that pull requests from authors (requesters) who are more open and conscientious, but less extroverted, have a higher chance of approval. Furthermore, pull requests that are closed by developers (closers) who are more conscientious, extroverted, and neurotic, have a higher likelihood of acceptance. The larger the difference in personality traits between the requester and the closer, the more positive effect it has on pull request acceptance. Although the effect of personality traits is significant and comparable to technical factors, we find that social factors are still more influential when it comes to the effect in the likelihood of pull request acceptance. We perform a second experiment to analyze the effect of emotions on pull request decisions. To predict emotions in the comments, we develop a generalised, software engineering specific language model that outperforms previous machine learning algorithms on four different standard datasets. We find that the percentage of positive comments from both requester and closer has a positive association with pull request acceptance, whereas the percentage of negative comments has a negative association. Also, the polarity of the emotion associated with the first comment of both requester and closer had a positive association with pull request acceptance, i.e., more positive the emotion, the higher the likelihood of acceptance. Finally, we find that social factors moderate the effects of emotions.