MicroRNAs and their role within the teleost (Oncorhynchus mykiss) stress response 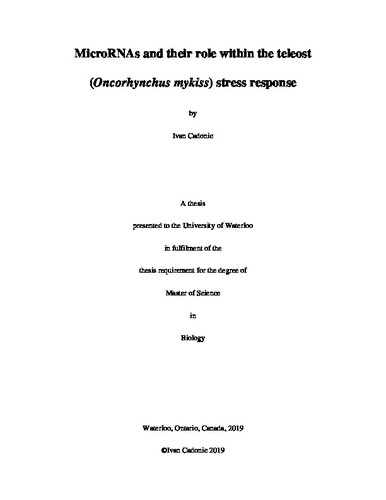 The stress response is a highly conserved signalling cascade that signals between tissues to increase energy availability. Changes in glucose regulation are studied extensively due to the glucose intolerant phenotype of rainbow trout (Oncorhynchus mykiss). Recent studies have started to investigate microRNAs (miRNAs) in this phenotype, and previous work in other models has linked microRNAs to stress as well. MiRNAs are small, non-coding RNAs that bind to the 3’ UTR of mRNA and act to silence translation or degrade the transcript. These miRNAs can also be present in circulation by association with extracellular vesicles (EVs; such as exosomes), which have been shown to signal between tissues. Therefore, the primary aim of this thesis was to establish the role of miRNAs in the teleost stress response, both within and between tissues. The two studies used in vivo and in vitro techniques to determine how stress and the hormone cortisol impacts miRNA levels. In the first chapter, rainbow trout were exposed to a 3-minute acute air exposure and allowed to recover for 1-, 3-, or 24-hours. MiRNA levels in plasma EVs, anterior kidney, and liver were measured, and changes linked to pathways that could be impacted using KEGG analysis. Overall, miRNAs increased in EVs in circulation. Tissue miRNA abundances either remained constant or decreased. KEGG revealed that predominantly metabolic pathways were the targets for these miRNAs. Therefore, the circulating miRNAs could be stored in the blood to increase the metabolic potential of tissues and then reabsorbed later during recovery. Tissue abundances were likely reflecting the increase in circulating glucose observed by allowing for increased glycolytic potential. In the second chapter, rainbow trout hepatocytes were exposed to increasing concentrations of cortisol to determine how the hormone might influence the miRNA associated with glucose metabolism. Hepatocytes were exposed for 2- or 4-hours to 0, 30, 300, or 3000 ng/mL of cortisol and both cell and supernatant fractions taken. MiRNA predicted to target key enzymes involved in gluconeogenesis (fructose-1,6-bisphosphatase and phosphoenolpyruvate carboxykinase) and glycolysis (glucokinase and pyruvate kinase) were measured to see how cortisol impacted their epigenetic regulation. However, supernatant levels of LDH were found to be different between fish, which may indicate necrosis of the cells during the exposure. Transcript abundances of glycolytic enzymes and the miRNAs predicted to target them were not impacted at any timepoint, but cortisol increased gluconeogenic transcripts and miRNAs. Enzyme activities were also not affected by cortisol exposure, but time-dependant decreases in glycolytic enzymes could be due to changes in glucose availability during the experiment. Although few changes were measured, the miRNA predicted to impact enzymes have been implicated in other glucose-intolerant phenotypes. The results of these studies indicate that miRNAs can be impacted by stress and could be involved in regulating translation during recovery. Future studies should further investigate the role of miRNAs in the teleost stress response as the in vivo experiment clearly shows acute changes occurring that can influence physiology during recovery. The miRNAs predicted in chapter 2 should also be investigated further for their role in glucose metabolism within the context of stress.