Does Posture Influence the Stroop Effect ? 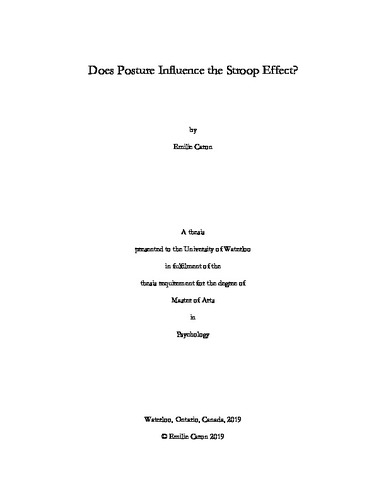 Rosenbaum, Mama, and Algom (2017, Psychological Science, 28, 1864-1867) reported that participants completing the Stroop task (i.e., name the hue of a colour word when the hue and word meaning are congruent or incongruent), showed a smaller Stroop effect (i.e., the difference in response times (RT) between congruent and incongruent trials) when they completed the task standing than when sitting. Here, we report two attempted replications of Rosenbaum et al.’s findings. In Experiment 1 we replicated Rosenbaum et al.’s methodology while also including neutral trials to evaluate whether posture affected Stroop interference (by comparing incongruent and neutral trials) and/or Stroop facilitation (by comparing congruent and neutral trials). In Experiment 2 participants completed only congruent and incongruent trials but were also instructed to keep their feet flat on the floor approximately hip-width apart and avoid leaning on the desk. Because Rosenbaum et al. proposed that standing is attentionally demanding and consumes resources needed for the Stroop task, we hoped that having participants focus on their posture in Experiments 2 might, if anything, increase our chances of replicating Rosenbaum et al.’s findings. Results from both experiments yielded the standard Stroop effect (i.e., slower RTs on incongruent vs. congruent trials (and neutral trials in Experiment 1)), but we failed to detect any influence of posture (sitting vs. standing) on the magnitude of the Stroop effect. Taken together, the results suggest that posture does not influence the magnitude of the Stroop effect to the extent that was previously suggested.