Model for a cortical circuit associated with childhood absence epilepsy 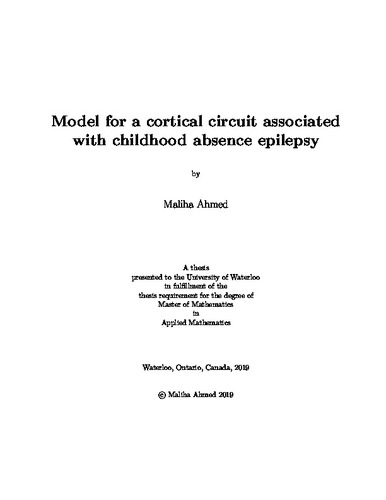 Childhood absence epilepsy is suspected to result from mutations in genes which encode ion channels including sodium channels. Our purpose in this thesis is to explore some of the factors that alter the function of neurons in the cerebral cortex. In particular, we investigate the consequence of these alterations on neuronal network activity associated with this disorder. In this regard, we create a small network consisting of deep layer cortical pyramidal neurons and an interneuron, each described by a single-compartment Hodgkin-Huxley style model. We investigate factors that convert a normal network into a hyperexcitable one, including impairment of $GABA_A$ synapses and sodium channel defects resulting from mutations in Scn genes. Our model agrees with experimental results indicating the role of GABA impairment in generating a hyperexcitable network. In particular, our cortical network is capable of generating its own spike-and-wave oscillations analogous to those in a thalamocortical network. Our results also suggest that the co-existence of multiple $Na^{+}$- channel mutations alters individual neuronal function to increase or decrease the likelihood of the network exhibiting seizure-like behaviour.