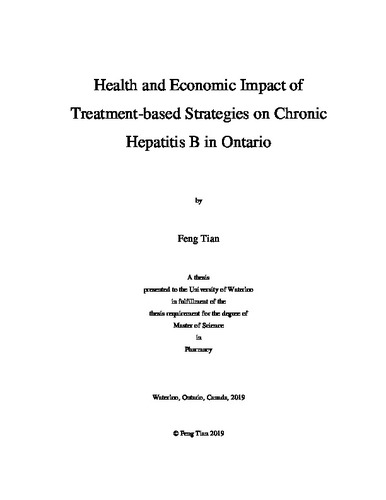 Background/Aim: The lives of about 257 million people in the world are being affected by chronic hepatitis B (CHB), and this contagious disease is gradually pushing them closer to the edge of death caused by cirrhosis and hepatocellular carcinoma. Ontario is closely connected to the rest of the world; more than 40% of the annual population growth over the past decade has come from immigrants. Addressing hepatitis B and achieving the World Health Organization (WHO)’s hepatitis elimination goals are vital. Tenofovir alafenamide (TAF) has been approved for treating CHB due to a proposed better safety profile in comparison to current therapies. However, its cost-effectiveness remains unknown. The aim of this thesis was to assess the health and economic impact of TAF and other treatments of CHB in Ontario. Methods: Two types of health policy models were employed to compare strategies involving entecavir (ETV), tenofovir disoproxil fumarate (TDF), and TAF. 1) A state-transition model (STM) based on the natural history of CHB and the published literature was developed to evaluate the cost-effectiveness of the treatment strategies for hepatitis B envelope antigen (HBeAg)-positive and HBeAg-negative CHB patients from an Ontario Ministry of Health perspective. It adopted a lifetime time horizon, and outcomes measured were predicted number of liver-related disease and deaths, costs (2018 Canadian dollars), quality-adjusted life years (QALYs), and incremental cost-effectiveness ratios (ICERs). 2) An agent-based model (ABM) that accommodates differential selectivity, behavior, and network properties was developed to predict the impact of the treatment-as-prevention options on the incidence and prevalence of hepatitis B virus (HBV)-related health outcomes in Ontario over the next decade. We simulated the entire Ontario population, stratified by age, gender, residential address, and immigration status. Parameters were estimated from literature-derived estimates regarding Ontario demographics, epidemiology, and sexual behavior. Historical Ontario HBV data were used for calibration. Results: 1) The STM found that TAF-containing strategies are unlikely to be a rational choice for treating CHB infections. For HBeAg-positive patients, TAF followed by ETV generated an additional 0.16 QALYs/person at an additional cost of $14,836.18 with an ICER of $94,142.71/QALY compared with TDF followed by ETV. Only 28.7% of the iterations showed that it is the optimal strategy with $50,000 willingness-to-pay threshold. For HBeAg-negative patients, ETV followed by TAF would prevent an additional 13 liver-related deaths per 1,000 CHB patients treated compared with TDF followed by ETV. It generated an additional 0.13 QALYs/person at an additional cost of $59,776.53 with an ICER of $461,162.21/QALY compared with TDF followed by ETV. 2) We calibrated the ABM-simulated number of reported acute hepatitis B (AHB) infections with the historical reported cases in Ontario. After extensive calibration and validation processes, our model showed a good match with the real-world observations. The ABM predicted that the actual prevalence of CHB in Ontario would decrease by 11.5% from 2017 to 2030 if all CHB patients eligible and ready for treatment begin to receive TDF followed by ETV or TAF followed by ETV after 2016. The reported incidence of AHB and the actual incidence of liver-related death are expected to fall by 48.9% and rise by 12.3% from 2017 to 2030, respectively. TAF followed by ETV was not found to be significantly different from TDF followed by ETV in reducing the prevalence and incidence of HBV-related health outcomes. Conclusions: TAF is not cost-effective at its current cost. A 33.4% reduction in price would be required to make it cost-effective for HBeAg-positive patients with a $50,000 willingness-to-pay threshold. The percentages of decline in new CHB cases and liver-related deaths from 2017 to 2030 would be 37.8% and 77.3% lower than the percentages that the WHO is targeting, respectively. Ontario is unable to achieve the WHO’s goals of eliminating new CHB cases and CHB deaths simply by relying on current treatment-as-prevention strategies.