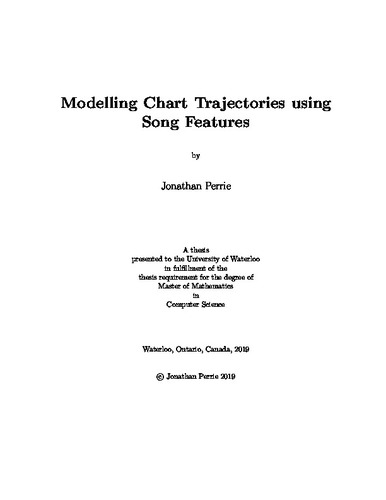 i just wanted to represent my vietnamese heritage (1.887Mb)

Over the years, hit song science has been a controversial topic within music information retrieval. Researchers have debated whether an unbiased dataset can be constructed to model song performance in a meaningful way. Often, classes for modelling are derived from one dimension of song performance, like for example, a song’s peak position on some chart. We aim to develop target variables for modelling song performance as trajectory patterns that consider both a song's lasting power and its listener reach. We model our target variables over various datasets using a wide array of features across different domains, which include metadata, audio, and lyric features. We found that the metadata features, which act as baseline song attributes, oftentimes had the most power in distinguishing our proposed task classes. When modelling hits and flops along one dimension of song success, we observed that the dimensions carried contrasting information, thus justifying their fusion into a two-dimensional target variable, which could be useful for future researchers who want to better understand the relationships between song features and performance. We were unable to show that our target variables were all that useful for modelling more than two classes, but we believe that this is more a limitation of the features, which were often high level, rather than the target variables' separability. Along with our model analysis, we also carried out a re-implementation of a related study by Askin & Mauskapf and considered different applications of our data using methods from time series analysis.