An Application of Matrix Analytic Methods to Queueing Models with Polling 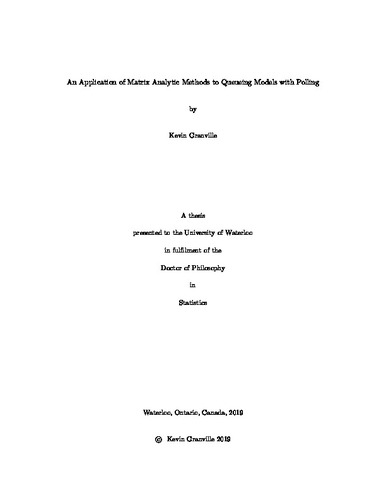 We review what it means to model a queueing system, and highlight several components of interest which govern the behaviour of customers, as well as the server(s) who tend to them. Our primary focus is on polling systems, which involve one or more servers who must serve multiple queues of customers according to their service policy, which is made up of an overall polling order, and a service discipline defined at each queue. The most common polling orders and service disciplines are discussed, and some examples are given to demonstrate their use. Classic matrix analytic method theory is built up and illustrated on models of increasing complexity, to provide context for the analyses of later chapters. The original research contained within this thesis is divided into two halves, finite population maintenance models and infinite population cyclic polling models. In the first half, we investigate a 2-class maintenance system with a single server, expressed as a polling model. In Chapter 2, the model we study considers a total of C machines which are at risk of failing when working. Depending on the failure that a machine experiences, it is sorted into either the class-1 or class-2 queue where it awaits service among other machines suffering from similar failures. The possible service policies that are considered include exhaustive, non-preemptive priority, and preemptive resume priority. In Chapter 3, this model is generalized to allow for a maintenance float of f spare machines that can be turned on to replace a failed machine. Additionally, the possible server behaviours are greatly generalized. In both chapters, among other topics, we discuss the optimization of server behaviour as well as the limiting number of working machines as we let C go to infinity. As these are systems with a finite population (for a given C and f), their steady-state distributions can be solved for using the algorithm for level-dependent quasi-birth-and-death processes without loss of accuracy. When a class of customers are impatient, the algorithms covered in this thesis require their queue length to be truncated in order for us to approximate the steady-state distribution for all but the simplest model. In Chapter 4, we model a 2-queue polling system with impatient customers and k_i-limited service disciplines. Finite buffers are assumed for both queues, such that if a customer arrives to find their queue full then they are blocked and lost forever. Finite buffers are a way to interpret a necessary truncation level, since we can simply assume that it is impossible to observe the removed states. However, if we are interested in approximating an infinite buffer system, this inconsistency will bias the steady-state probabilities if blocking probabilities are not negligible. In Chapter 5, we introduce the Unobserved Waiting Customer approximation as a way to reduce this natural biasing that is incurred when approximating an infinite buffer system. Among the queues considered within this chapter is a N-queue system with exhaustive service and customers who may or may not be impatient. In Chapter 6, we extend this approximation to allow for reneging rates that depend on a customer's place in their queue. This is applied to a N-queue polling system which generalizes the model of Chapter 4.