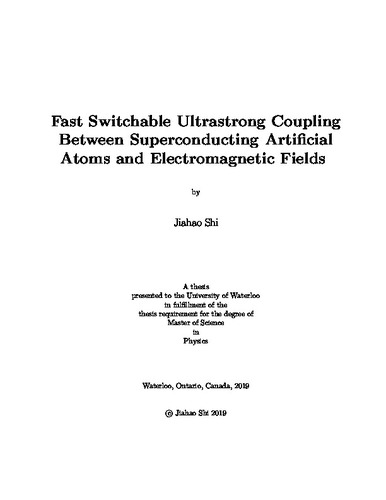 This thesis consists of two parts: the main part is a theoretical investigation of the ultrastrong coupling regime for atom-light coupling in superconducting circuits, and the second part is concerned with the development of a new high coherence flux qubit design. The spin-boson model describes the interaction between a quantum two-level system and a continuum of bosonic modes. When the interaction strength becomes comparable to the system frequency, the system enters the ultrastrong coupling (USC) regime, where the rotating wave approximation breaks and the system dynamics need to be described nonperturbatively. Recently, the ultrastrong coupling has been achieved on a device consisting of a superconducting flux qubit coupled to an electromagnetic continuum, with the coupling strength being verified in experiments by the standard transmission method. The first project in this thesis aims to measure the dynamics of the spin-boson model in a direct and controllable way when the coupling strength is in the USC regime. We propose three experiments to measure the coherence of the two-level system including the relaxation and dephasing, and the the renormalized tunneling frequencies in the ultrastrong coupling regime. The controllable measurements are realized with a fast-switchable ultrastrong coupling system consisting of a two-loop flux qubit galvanically coupled to an open transmission line, flux bias and driving lines, and readout circuits. The design and model of the full device are presented. We demonstrate that the three proposed experiments can be well implemented based on the simulations of qubit properties and coupling strengths. The second part of the thesis presents work on the design of a new type of capacitively shunted flux qubit. This work is motivated by improving qubit coherence time and anharmonicity, which is essential for speeding up qubit gates and enhancing the capability of quantum computing. It was demonstrated that adding shunting pads to flux qubits can drastically improve the coherence time and the reliability of qubit fabrication, but the CSFQ was shown with moderate anharmonicities. In this project, we present the a new design of CSFQ and its circuit model, which contains three Josephson junctions and three shunting pads. In experiments, the qubit spectroscopy matches well with the circuit model, which takes into account all the capacitances between the qubit and other circuits. The qubit is found to have both large anharmonicity A = ω₁₂ - ω₀₁ = 2π ⨯ 3.69 GHz, and high coherence with T₁ = 40 ± 5 µs. We also present experiments on the multilevel quantum control and multilevel relaxation measurement. We perform qutrit state tomography to reconstruct the full density matrix with the tomography fidelity reaching 99.2%. We are able to extract the time-dependent state populations for the relaxation process of a qutrit, and extract the exact transition rates between the three levels.