The Evolution of Dark Matter Haloes in Mergers 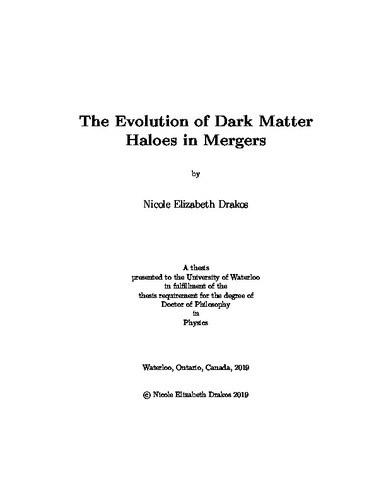 In the standard Λ-cold dark matter (ΛCDM) cosmological model, the present-day universe contains dominant components of dark energy (Λ) and cold dark matter (CDM). Fluctuations in the initial distribution of dark matter collapse to form dense, gravitationally bound dark matter haloes, which then evolve hierarchically through repeated mergers. Although the ΛCDM model is largely successful in describing our universe, the nature and identity of dark matter and dark energy remain unclear. ΛCDM may have problems describing structure on small scales, while on large scales, there are mild tensions between different estimates of the cosmological parameters. The structural properties of individual dark matter haloes, including their shape, spin, concentration, and substructure, are linked to halo growth history and thus reflect the cosmological model. The goal of this thesis is to understand how dark matter halo structural properties evolve in minor and major mergers, and to study how halo evolution can inform cosmology. Halo mergers can be classified as either major or minor based on the mass ratio of the merging systems. In minor mergers, smaller subhaloes fall into larger host haloes and evolve through tidal stripping. Predicting the evolution of subhaloes has important applications to studies of galaxy evolution and the nature of dark matter; in particular, the dense central regions of haloes dominate the signal from dark matter annihilation, so understanding how these central regions evolve is important for predicting the strength of the annihilation signal, and thus placing constraints on dark matter particle candidates. In the first part of this thesis (Chapters 2 and 3), we develop a simple, physically motivated model of tidal stripping that can be applied to any collisionless system to predict its structural evolution. In the second part of the thesis (Chapters 4 and 5), we perform a large suite of simulations of binary equal-mass mergers between isolated haloes with various density profiles to study the effects of major mergers on dark matter halo properties. We find that the axis ratios describing the 3D shapes of the merger remnants vary linearly with a scaled dimensionless energy parameter, κ, and an angular momentum (or spin) parameter, λ. The mass distribution is determined mainly by κ, where energetic (low-κ) encounters produce more extended remnants while mergers of strongly bound (high-κ) systems produce compact remnants. Surprisingly, major mergers seem to be relatively ineffective at changing the central densities of haloes, and thus unlikely to explain the mean trends in the concentration–mass–redshift relation. Overall, Chapters 2–5 present models for how haloes evolve in mergers, including the evolution of tidally stripped haloes in minor mergers, as well as a description for how halo spin, shape, mass distribution, and concentration evolve in major mergers. In the final chapter, we discuss a potential application of this work, to develop semi-analytic models of halo structural evolution and use these to predict how halo properties should vary with the cosmological model. Ultimately, the structural properties of haloes could provide powerful cosmological tests that will become feasible with the completion of next-generation surveys.