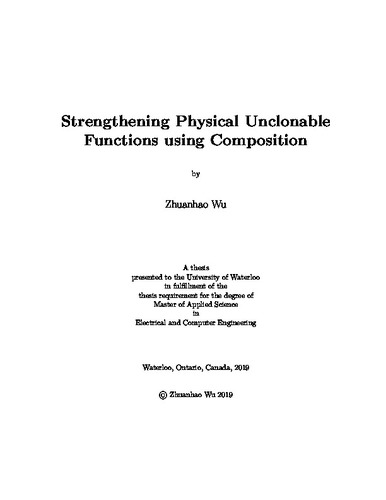 We explore the idea of composing PUFs with the intent that the resultant PUF is stronger than the constituent PUFs. Prior work has proposed a construction, which sub- sequent work has shown to be weak. We revisit this prior construction and observe that it is actually weaker than previously thought when the constituent PUFs are arbiter PUFs. This weakness is demonstrated via our adaptation of the previously proposed Logistic Regression (LR) attack. We then propose new constructions called PUFs-composed-with- PUFs (P◦P). In particular, we retain a two-layer construction, but allow the same input to the composite PUF to be input to more than one constituent PUF at the first layer. We explore this family of constructions, with arbiter PUFs serving as the constituent PUFs. In particular, we identify several axes which we can vary, and empirically study the resilience of our constructions compared to the prior construction and one another from the stand- point of LR attacks. As insight in to why our family of constructions is stronger, we prove, under some idealized conditions, that the lower-bound on an attacker is indeed higher un- der our constructions than the upper-bound on an attacker for the prior construction. As such, our work suggests that composition can be a promising approach to strengthening PUFs, contrary to what prior work suggests.