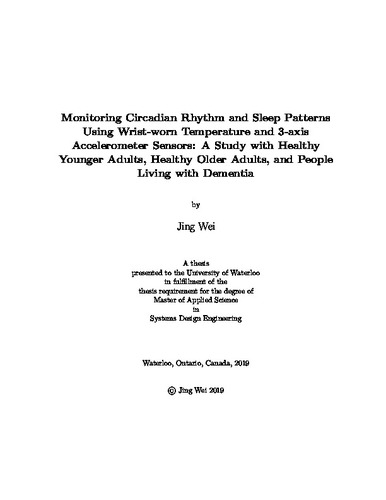 Sleep plays an important role in our life; monitoring and understanding our sleep can support better sleep habits and therefore health and quality of life. Research has shown that sleep is mainly regulated by people’s internal circadian rhythms. The traditional way to infer circadian rhythm is to measure dim light melatonin or core body temperature, both of which are impractical to monitor on a day-to-day basis. Recently, wrist temperature has been shown to be a good alternative as it has a closer association with sleep patterns. Wrist temperature increases when people fall asleep and decreases after people wake up. However, there has been virtually no research on whether and how this trend will change as people get older or have dementia. Revealing differences in wrist temperature rhythms among healthy younger adults, healthy older adults and Older Adults with Dementia (OAWD) could help to support a better sleep for each population. The goal of this research is to explore the wrist temperature patterns and their underlying implications for both circadian rhythms and sleep patterns for people of different ages and cognition. Healthy younger adults (n=10), healthy older adults (n=10), and OAWD (n=8) wore a customized wristband with a temperature sensor and a three-axis accelerometer sensor along with a commercial wristband (Mi Band 2) for 14 days. Their wrist temperature rhythms were analyzed and compared for the three groups and differences in daytime temperature value and variation are found. An evaluation of the Mi Band 2 is showed decreasing accuracy for the older adult populations, especially OAWD. Accelerometer data showed one older participant and all OAWD had frequent body movements during sleep, which is pinpointed as the main cause for the poor performance of the Mi Band 2. Four case studies are presented to show these body movements together with their wrist temperature rhythms. As wrist temperature rhythms were not affected by participants’ movements, this supports the usefulness of wrist temperature in more comprehensive and accurate sleep analysis. Lastly, novel two sleep detection algorithms are proposed; one is built solely on wrist temperature, while the other uses features from both wrist temperature and accelerometry. While the wrist temperature alone algorithm performed better than the Mi Band for OAWD, using both data sources showed increases in sleep detection accuracy for all participants it was tested with. Preliminary results show that the wrist temperature has the potential to play a valuable role in better identification and understanding or sleep, including for people with movement-related sleep disorders.