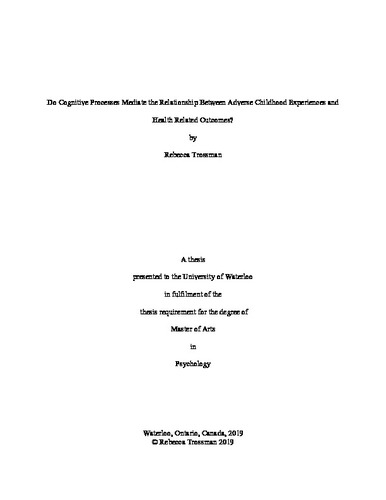 Adverse childhood experiences (ACEs) are stressful life events that occur during development. It is well-established that ACE exposure has negative downstream implications for a broad range of health-related behaviors, ultimately hastening mortality. Underlying mechanisms linking the experience of early life adversity with poor health remain less understood, however, and thus potential targets for intervention remain elusive. This work seeks to fill an important theoretical gap in the ACE literature by evaluating whether executive function (EF) constitute a biologically-plausible mediating mechanism in this causal pathway. To do so, two separate studies were conducted. In Study 1, undergraduate students completed measures of ACE exposure, EF, health-risk behaviors (e.g., smoking, drug and alcohol use, unsafe sexual practices), and psychopathology (e.g., anxiety, depression). Multivariate modeling determined that executive dysfunction in daily life mediated the relationship between childhood adversity exposure and current mental health concerns. EF did not mediate the effect between ACEs and health-risk behaviours. Study 2 sought to replicate and extend this work by narrowing the focus of health-risk behaviours to those most relevant for an undergraduate population (i.e., risky alcohol-related behaviours), and incorporating behavioural measures of EF in addition to self-report questionnaires. EF difficulties in daily life, but not on in-lab tasks, mediated the relationship between ACEs and psychopathology symptoms. The relationship between ACEs and risky alcohol use was not mediated by EF. These results partially support a neurodevelopmental model of ACE exposure vis-à-vis future health, focusing on the role of EF.