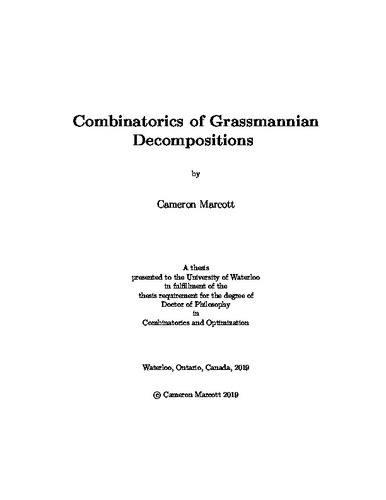 This thesis studies several combinatorially defined families of subsets of the Grassmannian. We introduce and study a family of subsets called “basis shape loci” associated to transversal matroids. Additionally, we study the Deodhar and positroid decompositions of the Grassmannian. A basis shape locus takes as input data a zero/nonzero pattern in a matrix, which is equivalent to a specific presentation of a transversal matroid. The locus is defined to be the set of points in the Grassmannian which are the row spaces of matrices with the prescribed zero/nonzero pattern. We show that this locus depends only on the transversal matroid, not on the specific presentation. When a transversal matroid is a positroid, the closure of its basis shape locus is exactly the positroid variety labelled by the matroid. We give a sufficient, and conjecturally necessary, condition for when a transversal matroid is a positroid. Components in the Deodhar decomposition are indexed by Go-diagrams, certain fillings of Ferrers shapes with white stones, black stones, and pluses. Le-diagrams are a common combinatorial object indexing positroids; all Le-diagrams are Go-diagrams. We give a system of local flips on fillings of Ferrers shapes which may be used to turn arbitrary diagrams into Go-diagrams. When a Go-diagram is a Le-diagram, these flips are exactly the previously studied Le-moves. Using these local flips, we conjecture a combinatorial condition describing when one Deodhar component is contained in the closure of another within a Schubert cell. We define a variety containing and conjecturally equal to the closure of a Deodhar component and prove that this combinatorial criterion implies a containment of these varieties. We further show that there is no reasonable description of Go-diagrams in terms of forbidden subdiagrams by providing an injection from the set of valid Go- diagrams into the set of minimal forbidden subdiagrams. In lieu of such a description, we give an algorithmic characterization of Go-diagrams. Finally, we use the above results to prove several corollaries about Wilson loop cells, which arise in the study of scattering amplitudes in N=4 supersymmetric Yang-Mills theory. Notably, it was previously known that the matroid represented by a generic point in a Wilson loop cell is a positroid. We show that the closure of the Wilson loop cell agrees with the positroid variety labelled by this positroid.