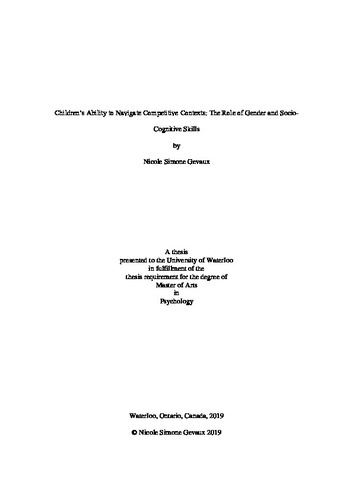 A crucial aspect of children’s development is learning to navigate the diverse contexts within their social world. Competitive contexts are unique in that individuals must attempt to perform well or win, but also maintain social relationships with peers or competitors. This study assessed how the context (winning/tying/losing), gender, and socio-cognitive skills affected children’s game play and communication with opponents. Four- to six-year-old children (N= 102) played a rigged game on an electronic tablet against fictional peers (who participants believed were real children). Children sent verbal messages to their opponents after receiving feedback that they had won, tied or lost. Children’s performance in the game improved after receiving feedback that they had won or tied previous games but did not improve after feedback that they were losing. Girls performed better on the competitive game than boys, regardless of context. Girls with higher executive functioning abilities showed more improvement in their performance after receiving feedback that they were winning. Better theory of mind abilities predicted better game play performance for both genders, regardless of perceived outcome. In a losing context, boys’ messages to opponents on the final trial showed more pro-social content than girls. Moreover, girls became continuously less pro-social towards their opponents after feedback that they were losing. Older children displayed higher levels of pro-social behaviour regardless of context. This research provides new insights into how context, gender and socio-cognitive skills influence pre-schooler’s performance and social behaviours in a competitive environment.