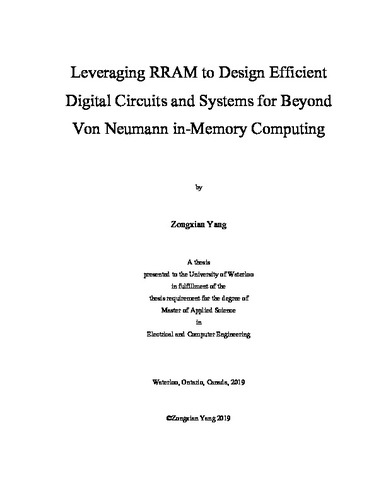 Due to the physical separation of their processing elements and storage units, contemporary digital computers are confronted with the thorny memory-wall problem. The strategy of in-memory computing has been considered as a promising solution to overcome the von Neumann bottleneck and design high-performance, energy-efficient computing systems. Moreover, in the post Moore era, post-CMOS technologies have received intense interests for possible future digital logic applications beyond the CMOS scaling limits. Motivated by these perspectives from system level to device level, this thesis proposes two effective processing-in-memory schemes to construct the non-von Neumann systems based on nonvolatile resistive random-access memory (RRAM). In the first scheme, we present functionally complete stateful logic gates based on a CMOS-compatible 2-transistor-2-RRAM (2T2R) structure. In this structure, the programmable logic functionality is determined by the amplitude of operation voltages, rather than its circuit topology. A reconfigurable 3T2R chain with programmable interconnects is used to implement complex combinational logic circuits. The design has a highly regular and symmetric circuit structure, making it easy for design, integration, and fabrication, while the operations are flexible yet clean. Easily integrated as 3-dimensional (3-D) stacked arrays, two proposed memory architectures not only serve as regular 3-D memory arrays but also perform in-memory-computing within the same layer and between the stacked layers. The second scheme leverages hybrid logic in the same hardware to design efficient digital circuits and systems with low computational complexity. Multiple-bit ripple-carry adder (RCA), pipelined RCA, and prefix tree adder are shown as example circuits, using the same regular chain structure, to validate the design efficiency. The design principles, computational complexity, and performance are discussed and compared to the CMOS technology and other state-of-the-art post-CMOS implementations. The overall evaluation shows superior performance in speed and area. The result of the study could build a technology cell library that can be potentially used as input to a technology-mapping algorithm. The proposed hybrid-logic methodology presents prospect of hardware acceleration and future beyond-von Neumann in-memory computing architectures.