Gender Differences in Chronic Disease Risk Behaviours and their Association with Body Mass Index: Cross-sectional and Longitudinal Multilevel Analyses Among a Large Sample of Youth. 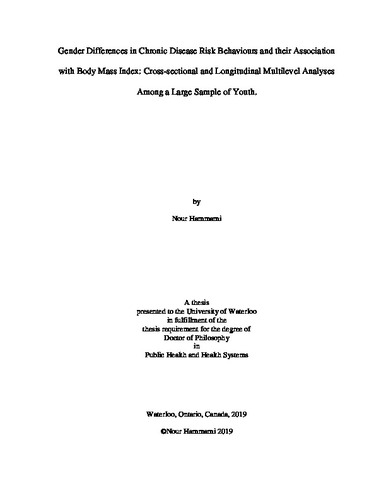 Obesity has become a worldwide concern due to the escalating number of individuals who have overweight or obesity. The prevalence of overweight/obesity among youth aged 12-17 years old was 37% in 2012-2013, as reported in the Canadian Health Measures Survey, affecting approximately one in four youth in Canada. The Senate of Canada released a report in 2016 which advocated for obesity to be prioritized on a federal and provincial level by calling for a National Campaign to Combat Obesity among all provinces and urging Health Canada to work with the provinces to address the 21 recommendations provided in the report. Many factors contribute to the high overweight/obese rates, of which personal factors play a dominant role in preventing obesity and some are modifiable. Chronic disease risk behaviours (CDRB) are associated with obesity among youth include: physical activity (PA), binge drinking behaviour, cigarette smoking, dietary habits and sedentary behaviour. Some subgroups of youth are at a disadvantage relative to their peers because they engage in poorer CDRB and have higher rates of overweight/obesity compared with their peers. For example, youth who are victims of bullying (VoB) are reported to engage in more substance use and are found to be at higher odds of overweight/obesity than their non-VoB (NVoB) peers. CDRB and overweight/obesity track from adolescence into adulthood, making adolescence an optimal phase for interventions. The purpose of this dissertation was to conduct a gender-specific examination in the effect that latent classes of chronic disease risk behaviours have on Body Mass Index among youth (i) at the same time point (using repeated, cross-sectional analyses), as well (ii) as over time (using transitional, longitudinal analyses). Since youth who are VoB engage in more substance use than their peers and have higher rates of overweight/obesity, this dissertation also sought (iii) to investigate whether there were differences in the longitudinal association between consecutive bullying status and BMI among youth. Three research studies were conducted to address these three research objectives among a large sample of youth in Ontario, Canada. This dissertation used data from the ‘Cohort Study on Obesity, Marijuana Use, Physical Activity, Alcohol Use, Smoking and Sedentary Behaviour’ (COMPASS) Study. COMPASS’s student questionnaire collects information on youth’s health behaviours and health outcomes. This dissertation included youth participating in the COMPASS Study during 2013-2014 (Wave 1), 2014-2015 (Wave 2) and 2015-2016 (Wave 3) from Ontario, Canada. Multilevel latent class analysis (MLCA) was used to identify chronic disease risk behaviour latent classes. To assess for gender differences, the MLCA was stratified by gender (i.e., reported for females and males separately). Gender-specific, mixed-effects regression models were used to assess the nature of the association of Body Mass Index (BMI) on the latent classes. Each of these regression models were reported two times: with BMI (as a continuous variable) and as weight status (i.e., BMI as a binary variable). The first manuscript (i.e., Chapter 5) found that males were more physically active; however, they had more engagement in substance use (binge drinking, marijuana use and cigarette smoking) and had a higher prevalence of overweight/obesity relative to their female counterparts. The MLCA found that both genders have similar overall latent classes: active experimenters (ACE), inactive clean youth (INC) and inactive substance users (INSU). The repeated cross-sectional regression analyses found that youth in latent classes with substance use are associated with higher BMI and higher odds of an overweight/obese weight status among females and males. INC males were associated with lower odds of overweight/obesity relative to active males who experimented with substance use (ACE). As for females, the class with the highest proportion of youth using substances (INSU) were associated with higher odds of overweight/obesity relative to their active experimenting peers (ACE). The second manuscript (i.e., Chapter 6) used the latent classes that were identified in Chapter 5, in a transitional, gender-specific, mixed-effects regression model. The gender-stratified models showed that male inactive clean youth (i.e., INC) were associated with a 0.29 kg/m2 higher (continuous) BMI (95% C.I.=0.057, 0.53) and higher odds of overweight/obesity by 72% (OR=1.72, 95% C.I.=1.2, 2.4) for weight status at follow-up, relative to active experimenters. No significant associations were detected among females. The third manuscript (i.e., Chapter 7) assessed whether there were gender differences among VoB and NVoB in their association with BMI in a longitudinal analysis. VoB were found to engage in more physical activity and substance use than their NVoB peers. The longitudinal, transitional, gender-specific, mixed-effects models were consistent in showing that there are gender differences in the effect of bullying on BMI. Among female youth, repeated bullying was associated with a 51% increase in the odds of having overweight/obesity at follow-up (95% C.I.=1.03, 2.23). Among male youth, being a VoB at the previous wave only, was associated with a 60% increase in the odds of overweight/obesity (95% C.I.=1.11, 2.29). This dissertation emphasizes the importance of gender stratification in chronic disease risk behaviour, BMI and bullying research among youth. Females and males have different factors associated with BMI as well as with changes in BMI over time. Furthermore, gender-stratification is essential since using results from the models that adjusted for gender would misinform prevention programs since they downplay the effect of the associations being studied. This research will be valued among school programs, policy-makers and other researchers engaged in youth health, as it provides evidence that school-programs and population-level initiatives are warranted that focus on substance use and bullying prevention and that encourage PA engagement among youth.