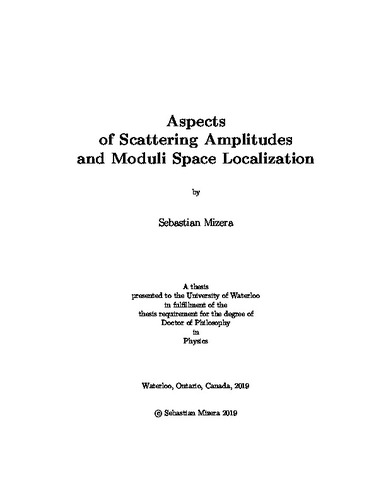 We propose that intersection numbers of certain cohomology classes on the moduli space of genus-zero Riemann surfaces with $n$ punctures, $\mathcal{M}_{0,n}$, compute tree-level scattering amplitudes in quantum field theories with a finite spectrum of particles. The relevant cohomology groups are twisted by representations of the fundamental group $\pi_1(\mathcal{M}_{0,n})$ that describes how punctures braid around each other on the Riemann surface. Such a structure can be used to link the space of Riemann surfaces with the space of kinematic invariants. Intersection numbers of said cohomology classes—whose representatives we call twisted forms—can be shown to fully localize on the boundaries of $\mathcal{M}_{0,n}$, which are in a one-to-one correspondence with trivalent trees that have an interpretation as Feynman diagrams. In this work we develop systematic approaches towards accessing such boundary information. We prove that when twisted forms are logarithmic, their intersection numbers have a simple expansion in terms of trivalent Feynman diagrams weighted by residues, allowing only for massless propagators on the internal and external lines. It is also known that in the massless limit intersection numbers have a different localization formula on the support of so-called scattering equations. Nevertheless, for physical applications one also needs to study non-logarithmic forms as they are responsible for propagation of massive states. We utilize the natural fibre bundle structure of $\mathcal{M}_{0,n}$—which allows for a direct access to the boundaries—to introduce recursion relations for intersection numbers that "integrate out" puncture-by-puncture. The resulting recursion involves only linear algebra of certain matrices describing braiding properties of $\mathcal{M}_{0,n}$ and evaluating one-dimensional residues, thus paving a way for explicit analytic computations of scattering amplitudes. Together with a reformulation of the tree-level S-matrix of string theory in terms of twisted forms, the results of this work complete a unified geometric framework for studying scattering amplitudes from genus-zero Riemann surfaces. We show that a web of dualities between different homology and cohomology groups allows for deriving a host of identities among various types of amplitudes computed from the moduli space, which in this setup become a consequence of linear algebra. Throughout this work we emphasize that algebraic computations can be supplemented—or indeed replaced—by combinatorial, geometric, and topological ones.