A Stochastic Framework for Soil-Structure Interaction and Constitutive Modelling 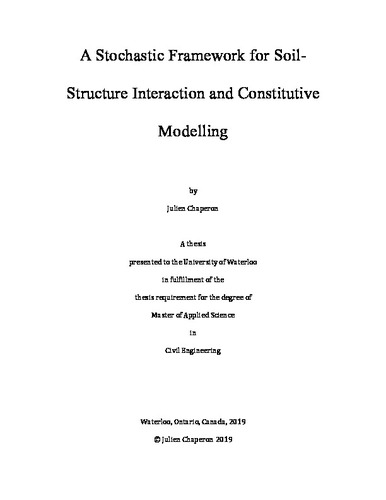 A stochastic framework for soil-structure interaction and constitutive modelling is investigated in this thesis and developed to account for uncertainties in material properties and loading conditions. The development of a one-dimensional Stochastic Finite Element Method (SFEM) for foundation problems is used as a starting point to describe the statistical behaviour of shallow and deep foundations at a local scale, where spatial variability exists. The Winkler model is adopted, and three sets of loading and boundary conditions are analyzed. A 1-D Karhunen-Loeve (KL) expansion is used to propagate the uncertainties in the material properties or loading conditions of each case. An exponential covariance structure is assumed for its applications in geophysics and in earthquake engineering. A different series representation known as the Polynomial Chaos expansion (PCE) is used to represent the random response since the covariance structure of the response is not known a priori. The method is combined with the Finite Element method (FEM) and used to solve three foundation problems. The accuracy and computational efficiency of the methodology for different orders of expansion is then compared with the Monte Carlo method. Thereafter, a similar problem is tackled for random inputs with a 2-D random field. A 2-D Karhunen-Loeve expansion is used and incorporated in the analytical solution of a 2-parameter continuum pile. Because of the analytical nature of the solution, and due to the non-linearity that arises as a result of the spectral decomposition of the soil properties, the representation of the response using the PCE is dropped to give way to an iterative solution. The results of the mean response for two examples taken from Basu and Salgado, 2008 are presented and compared to the deterministic solution. The uncertainties in material properties and loading conditions are then propagated at the constitutive level. A new methodology, the Fokker-Plank-Kolmogorov equation (FPKE), is adopted. The FPKE transforms the stochastic continuity equation of non-linear constitutive laws to second order linear deterministic partial differential equations. The one-dimensional development of the FPKE is undertaken and validated for a linear elastic shear model and linear elastic-plastic Von Mises model. Finally, the FPKE is extended to a three-dimensional framework and validated for a 3-D linear elastic model.