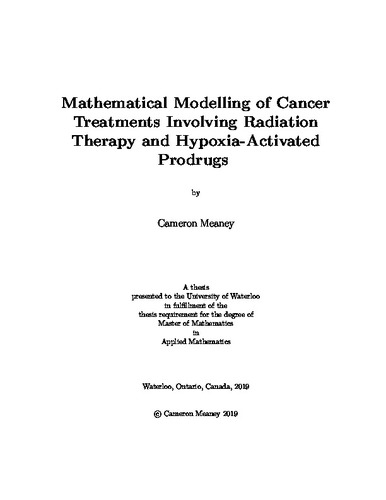 Cancer is one of the world's deadliest diseases despite immense investments into oncological research in recent years. Although great strides have been made in our understanding of cancer, much remains unknown regarding its genesis, progression, and optimal treatment. The benefits of mathematical modelling have been realized in many fields of science, and oncology is no exception. Mathematical modelling has become increasingly popular in recent years and today, studies involving both biologists and mathematicians are rather commonplace. This thesis focuses on mathematical oncology, detailing three distinct research works involving the mathematical analysis of cancer. They specifically focus on modelling the applications of various treatment methods including external-beam radiation therapy, hypoxia-activated prodrugs, antiangiogenic agents, and drug-carrying nanocells. The mathematics involves partial differential equation models solved analytically and by using various computational methods. Altogether, the analyses herein show that mathematical modelling is an invaluable tool in oncology which will be a crucial part of future research.