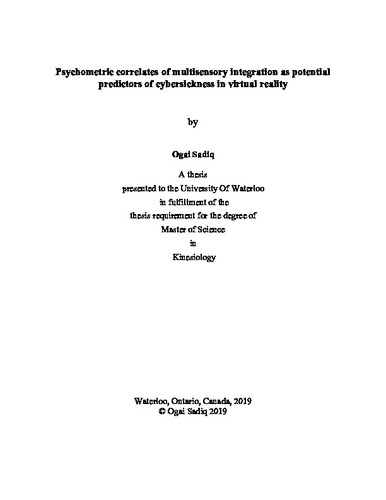 Humans are constantly presented with rich sensory information through the environment that the central nervous system (CNS) must process to form a coherent perception of the world. While the CNS may be efficient in doing so in natural environments, human-made environments such as virtual reality (VR) pose challenges for the CNS to integrate multisensory information. While VR systems are becoming widely used in various fields, it often causes cybersickness in users. Cybersickness may be due to temporal discrepancies in visually updating the environment after a movement. We sought to assess whether individual differences in the parameters of temporal order judgement of multisensory cues are related to cybersickness. We tested 50 participants in two different tasks. The first task involved two temporal order judgements, 1) an audio-visual (AV) and 2) an audio-active head movement (AAHM) task where participants were presented with a sound paired with a visual or head movement stimulus at different stimulus onset asynchronies. The second task involved exploration of two VR experiences for 30 minutes each where participants’ cybersickness was quantified every 2 minutes on the fast motion sickness scale and also at the end of the 30-minute period using the simulator sickness questionnaire (SSQ). Participants’ visual acuity was also assessed. Results demonstrate that there is a positive correlation between total SSQ scores and the temporal binding window (TBW) and point of subjective simultaneity (PSS) measures. These indicate that individuals with wider AV TBWs or larger PSS measures may be more susceptible to cybersickness. We also find that individuals with higher visual acuity report lower sickness symptoms which is contrary to previous studies. Results from such findings will generate a better understanding of cybersickness in VR which in turn can be used for future development of virtual environments so as to be able to minimize discomfort.