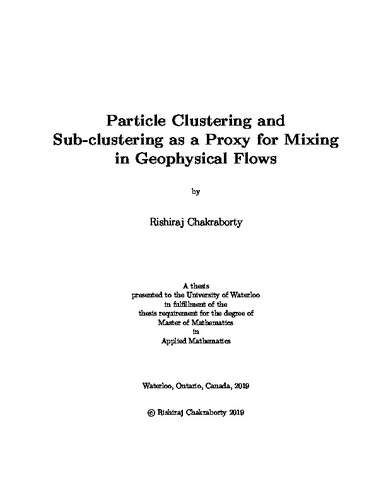 The Eulerian point of view is the traditional theoretical and numerical tool to describe fluid mechanics. Some modern computational fluid dynamics codes allow for the efficient simulation of particles, in turn facilitating a Lagrangian description of the flow. The existence and persistence of Lagrangian coherent structures in fluid flow has been a topic of considerable study. Here we focus on the ability of Lagrangian methods to characterize mixing in geophysical flows. We study the instability of a strongly non-linear double jet flow, initially in geostrophic balance, which forms quasi-coherent vortices when subjected to ageostrophic perturbations. Particle clustering techniques are applied to study the behaviour of the particles in the vicinity of coherent vortices. Changes in inter--particle distance play a key role in establishing the patterns in particle trajectories. This thesis exploits graph theory in finding particle clusters and regions of dense interactions (also known as sub-clusters). The methods discussed and results presented in this thesis can be used to identify mixing in a flow and extract information about particle behaviour in coherent structures from a Lagrangian point of view.

Rishiraj Chakraborty (2019). Particle Clustering and Sub-clustering as a Proxy for Mixing in Geophysical Flows. UWSpace. http://hdl.handle.net/10012/14895