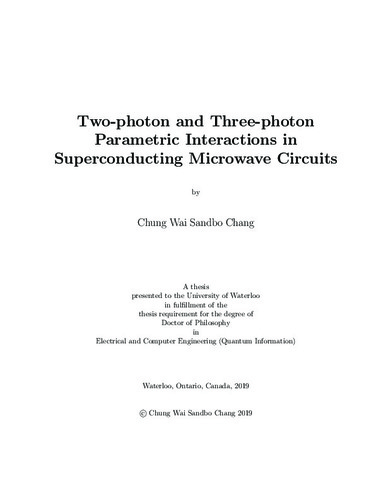 The flexible engineering of superconducting circuits, together with the nonlinearity available from Josephson junctions, have made microwave quantum optics a blooming research field in the past decade. Key experiments originally performed in the optical domain have become very accessible on this microwave-frequency, such that strong atom-field interactions and optical parametric interactions in microwave. From the latter, one example is the implementation of spontaneous parametric downconversion (SPDC). This process is particularly interesting as it can act as a nonclassical radiation source which give a number of potential applications in quantum information processing. We will focus on studying SPDC in microwave throughout this thesis. In the first half of this thesis, from designs to measurements, we will explore the well-known two-photon parametric processes, SPDC and coherent coupling, which are generated by quadratic Hamiltonians. Using three resonant modes of a SQUID-terminated parametric cavity, we proceeded to combine different two-photon processes in an effort to demonstrate a multipartite nonclassical radiation source. With detailed system gain and noise calibration of our cryogenic microwave network, we confirmed our implementation by experimentally verifying that the generated states contain genuine tripartite entanglement. This multimode entangled radiation source can be an important resource for future experiments on quantum networking. While two-photon parametric processes have found numerous important applications, they have also been the limit of experiments for over three decades, with higher-order parametric processes seemingly out of reach. In the second half of this thesis, we explore the potential of parametric resonators for achieving such higher-order processes. To do this, we first studied the necessary conditions for accessing cubic Hamiltonians through our SQUID-based interactions. We then fabricated a device dedicated to performing three-photon processes through these cubic Hamiltonians. For the first time, we observed a direct generation of photon triplets by a single SPDC process in microwave . The generation rate can exceed a photon flux density of 60 photon per second per Hertz at the device output, far surpassing any record to date for photon triplets. We studied various pump configurations corresponding to different three-photon SPDC processes starting from a cold vacuum state. Pumping at triple the frequency of a single mode, we observed a phase-space distribution with a non-Gaussian profile which shows strong skewness (third moment) in the quadrature amplitude distribution. We reconstruct the Wigner function of the propagating states from the directly measured moment matrix, demonstrating Wigner negativity. Pumping at the sum frequency of three modes, we observed non-zero coskewness between the quadrature amplitudes of the modes. By analysing the output signals and comparing their characteristics to the predicted theoretical signatures, we confirm our implementation of three-photon SPDC processes generated by specific cubic Hamiltonians. These types of non-Gaussian states have been suggested as a resource enabling universal quantum computation with continuous variables. Our results thus open up the realm of three-photon quantum optics, enabling a wealth of novel experimental and theoretical studies.