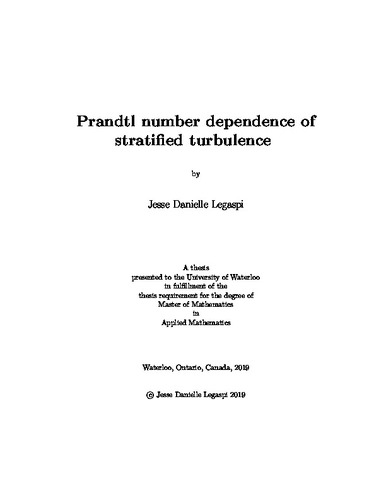 Stratified turbulence is affected by buoyancy forces that suppress vertical motion, resulting in a horizontally-layered structure with quasi-two-dimensional vortices. The Prandtl number Pr quantifies the relative strengths of viscosity and buoyancy diffusivity, which damp small-scale fluctuations in velocity and buoyancy at different microscales. Direct numerical simulations (DNS) must resolve the smallest flow features, requiring very high resolution if Pr is large. In most oceanic and atmospheric flows, Pr>1; e.g. Pr=7 in heat-stratified water, and Pr=700 in salt-stratified water. To reduce the computational demand in simulations of ocean flows and lab experiments of stratified turbulence, Pr=1 is often assumed, possibly introducing discrepancies between the DNS and real geophysical stratified turbulence. In this thesis, we explore how stratified turbulence is affected by varying Pr. DNS of homogeneous forced stratified turbulence with a fixed viscosity and Pr= 0.7, 1, 2, 4, and 8 are performed for different stratification strengths by changing the buoyancy frequency N, for a range of Froude numbers Fr_h from 0.009 to 0.1, and buoyancy Reynolds numbers Re_b from 0.5 to 32. Energy spectra, buoyancy flux spectra, spectral energy flux, and snapshots of physical space fields are compared as Pr increases to explore scale-specific Pr-sensitivity. Probability density functions and statistical moments of velocity component and temperature derivative fields are also compared to the Pr=1 findings. Small-scale Pr-dependence was found in the kinetic energy spectra that extended further upscale as stratification increased. The potential energy and potential energy flux exhibited more prominent Pr-sensitivity, extending into the large horizontal scales for some stratifications. Interestingly, the kinetic energy flux exhibited no Pr-dependence at small scales. The buoyancy flux was most sensitive to Pr in the small scales, except for the most strongly stratified case, which notably had Re_b<1. As Pr increased, all spectra showed a pattern of diminishing increase, suggesting eventual convergence to a limiting spectra shape at large but finite Pr. The spectra in the most strongly stratified case, where Re_b<1, were very different from the rest, suggesting regime-dependence of Pr-sensitivity (i.e. whether Re_b<1, or Re_b>1). The probability density functions and statistical moments for Pr different from 1 were consistent with previous work for Pr=1. Increasing Pr significantly affected the temperature derivative fields while the velocity component derivative fields were mostly unchanged. These findings suggest that, for DNS of stratified turbulence in fluids with Pr>1, the assumption of Pr=1 does not produce realistic results: the Pr-sensitivity at intermediate, and in some cases, large horizontal scales must be considered for accurate stratified turbulence DNS, though the excessive computational demand can be prohibitive.