Complexity in the AdS/CFT correspondence 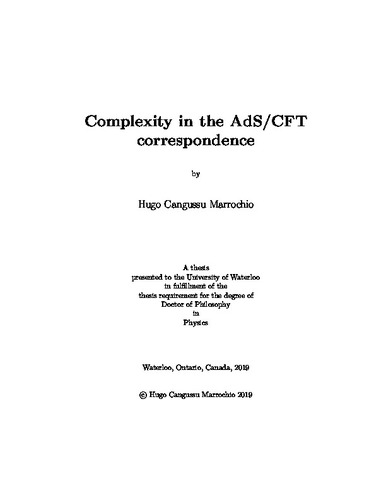 The main goal of this thesis is to carefully analyze aspects of the gravitational quantities conjectured to be dual to quantum complexity in the AdS/CFT correspondence. The two most promising candidates for such holographic proposals are known as the complexity=volume (CV) and complexity=action (CA) proposals, which will be the main objects of study in this thesis. The latter involves the evaluation of the gravitational action in a region of spacetime known as the Wheeler-DeWitt patch, whose boundary includes null hypersurfaces and null codimension-two joints. There are several subtleties when evaluating the action in a region bounded by null surfaces, and a major part of the work presented here is based on a careful treatment of the boundary contributions to the gravitational action. We start by evaluating the complexity of formation in holography, which is the additional complexity required to build the thermofield double state (TFD) in comparison to the complexity of building two copies of the vacuum. From the gravitational perspective, such quantity is interesting as it involves geometries with black holes. We find that for AdS-Schwarzschild black holes, both the CA and CV proposals yield a UV finite complexity of formation, and at large temperatures it becomes proportional to the thermodynamic entropy for boundary spacetime dimensions d>2. In addition, we investigate dynamical properties of the holographic duals of complexity. We study the time evolution of the thermofield double state for AdS-Schwarzschild and AdS-Reissner-Nordstrom black holes. In the AdS/CFT correspondence, this time evolution corresponds to time slices that cover the interior region of the black hole. We find the striking result that the late time rate of change of complexity in the CA proposal is approached from above, which implies that the originally proposed connection to the conjectured Lloyd's bound on computation rate is violated. In contrast, the CV proposal growth rate is approached from below at late times for these geometries. Next, we investigate the time evolution of holographic complexities when the bulk spacetime has non-trivial dynamics. We investigate both one-sided and two-sided Vaidya geometries, which are sourced by the collapse of an infinitesimally thin layer of null dust. In order to evaluate the complexity in the CA proposal, we construct a null fluid action that sources the Vaidya geometry. Our main result is that the inclusion of a surface counterterm that ensures reparametrization invariance to the null normals at the null boundaries of the Wheeler-DeWitt patch is necessary in order to reproduce desired properties of complexity, such as the switchback effect. In addition, we find that for one-sided black holes, the late time rate of change is approached from below in the CA approach, in contrast to what was found in two-sided geometries.