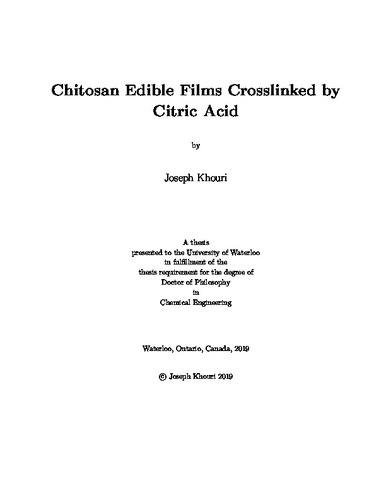 Chitosan offers an exciting potential as a safe, biodegradable material for niche food packaging and coating applications. Barriers to getting this crustacean-derived polysaccharide to the packaging market include poor processability and the competitive advantage of petroleum-based thermoplastics, which are cheaper, easier to produce, and have overall better mechanical and gas barrier properties. Crosslinking chitosan films with citric acid as a means of improving mechanical and moisture barrier properties was the objective of this research project. Incorporating citric acid into chitosan films using the heterogeneous crosslinking procedure for food packaging applications was investigated for the first time. Briefly, the heterogeneous crosslinking methodology involves neutralizing a solvent cast neat chitosan film, then adding the crosslinker to the neutralized film. Chitosan films with 15 % citric acid (w/w), denoted as CA films, were characterized and their structure - property relationships were compared with neat and neutralized films. Converting the crosslinking type between citric acid’s carboxylates and chitosan’s primary amine groups from ionic to covalent bonding requires thermal treatment. The CA films were heated at 150 °C for 0.5 h, denoted as CA-HT films. The covalent crosslinking was assessed by studying the temperature-dependent viscoelastic properties of the films from 30 to 200 °C using dynamic mechanical analysis (DMA) and by considering principles of the rubber elasticity theory. The viscoelastic properties of chitosan films homogeneously and heterogeneously crosslinked with a model crosslinker, glutaraldehyde (GLU), were also studied for comparative purposes. Covalent crosslinking of thermally treated CA films was not confirmed due to a non-significant difference between the storage modulus, E´, of neutralized, CA and CA-HT films. The DMA study also produced data that supports the notion that the tanδ relaxation peak of neat films near 165 °C is ascribable to structural relaxation caused by the acid present in the film, and is not a typical glass-rubber transition as it is often described in the literature. The tanδ relaxation peak diminished with neutralization and by increasing GLU concentration from 3 to 12 % (w/w). A partial resurgence of this tanδ peak occurred near 130 °C after the addition of citric acid, both in films prepared heterogeneously and in films cast with 15 % citric acid (w/w) in the filmogenic solution, providing further evidence of the relaxation mechanism source. Following the DMA work, the physical properties of chitosan films ionically crosslinked with citric acid were studied. Thermogravimetric analysis (TGA) tests showed citric acid enhanced thermal stability by increasing the temperature of the maximum rate of degradation by 7 °C compared to a neutralized film. The tensile strength (TS) increased from 60 to 85 to 95 MPa, for neat, neutralized and CA films, respectively, while elongation capacity remained constant, demonstrating a positive effect of ionic crosslinking on the mechanical properties. The crystallinity of CA films decreased relative to neutralized films, but were similar with respect to neat films, as estimated from x-ray diffraction (XRD). The water vapor permeability (WVP) was lowest for neat films at 5.06 × 10⁻¹¹ g/(m·s·Pa) and highest for neutralized films at 10.70 × 10⁻¹¹ g/(m·s·Pa). Incorporating citric acid into neutralized films decreased the WVP to 7.38 × 10⁻¹¹ g/(m·s·Pa) demonstrating the positive influence that organic acids have on the hydrogen bonding network of the film matrix in hindering moisture permeability. Moisture sorption isotherms supported the trends observed with the WVP measurements. Water contact angle measurements showed that the surface of CA films were slightly more hydrophobic, 79° compared to 72° for neat films, which is advantageous for packaging applications.Citric acid shows some benefits as a crosslinker for chitosan, particularly with the heterogeneous crosslinking method. The mechanical, thermal stability, and moisture barrier properties improved relative to either neat or neutralized films. Suggestions for future work include modification or optimization of the crosslinked film formation methodology to further enhance film characteristics mechanical and gas barrier properties. Additional properties such as oxygen and carbon dioxide permeability and antimicrobial properties could be investigated.