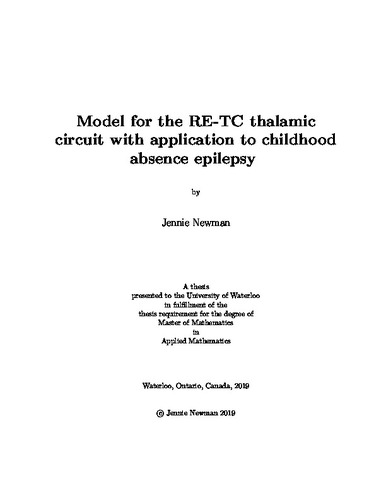 Childhood absence epilepsy (CAE) is an idiopathic neurological disorder aﬀecting roughly 2-8 children per 100,000 children worldwide. It is characterized by absence seizures, or short lapses in consciousness, and the appearance of slow wave discharge (SWD) patterns on an electroencephalogram (EEG). With the cause of onset and recovery still unknown, much research has been conducted in order to determine the set of genes responsible for this disorder. Experimental animal models and mathematical models of neural networks have so far suggested the thalamocortical network as the site of seizure initiation, and the 𝐶𝐴𝐶𝑁𝐴1𝐻 gene as a promoter of SWD patterns in the brain. In this thesis, we develop a mathematical model of part of the thalamocortical network, comprised of thalamic reticular (RE) and thalamocortical (TC) neurons. We then use this model to study the eﬀects of previously suggested CAE factors, such as the 𝐶𝐴𝐶𝑁𝐴1𝐻 gene mutation, GABA_A synapse conductance and T-type Ca²⁺ channel conductance, on the formation of SWD patterns in the network. We ﬁnd a link between a decreased GABA_A conductance and increased SWD activity in our network, as well as the dependence of SWD activity on the interactions between the multiple factors of our study. Our results imply that CAE and SWD activity may have a multifactorial cause, and that the thalamus may not be solely responsible for the generation and propagation of SWDs in the thalamocortical network.