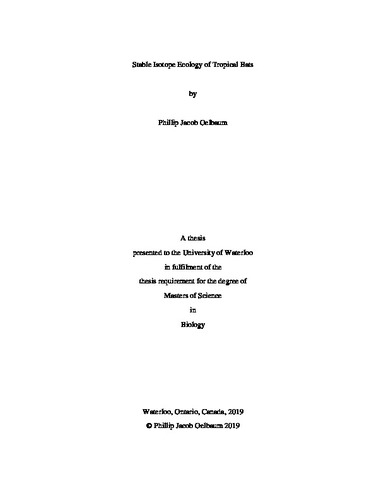 Stable isotopes have been used to characterize differences in animal diet and behaviour since experimental studies by DeNiro and Epstein (1979; 1981). Examining isotopic ratios enables researchers to track how animals interact with their environment as these ratios are derived from intake of nutrients and are fractionated into tissue at a calculable factor; in short, ‘you are what you eat’ (Tykot 2004). Studying bats, I use carbon (δ13C) and nitrogen (δ15N) stable isotopes to: (1) characterize community structure of a diverse fauna in Belize, (2) examine dietary differences between populations in a fragmented forest in Brazil, and (3) tested multiple tissues from the same individual to discern seasonal difference in diet in species from both the Neotropics and Paleotropics. In Belize, I found significant amounts of niche overlap between species which I predicted would belong to different guilds, and several cases of overlap which would suggest that species may compete for resources. In Brazil, I found that habitat composition (i.e., vegetation density) was more important than landscape metrics (sic fragment area, fragment nearest neighbour distance, etc.) in predicting the diets of frugivorous bats. I also found that multi-tissue stable isotope analysis is valuable in determining both individual variation in diet throughout the year and tracking seasonal changes as a result of resource availability or local-scale migration. Stable isotope analysis is a valuable tool in understanding the dietary ecology of animals.