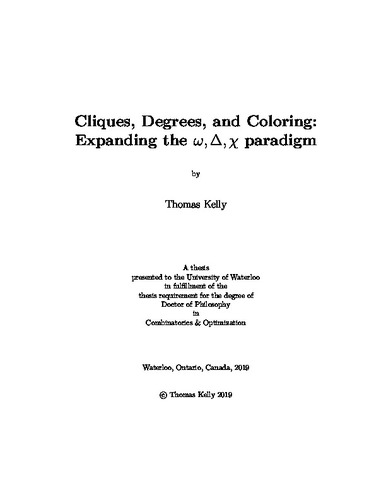 Many of the most celebrated and influential results in graph coloring, such as Brooks' Theorem and Vizing's Theorem, relate a graph's chromatic number to its clique number or maximum degree. Currently, several of the most important and enticing open problems in coloring, such as Reed's $\omega, \Delta, \chi$ Conjecture, follow this theme. This thesis both broadens and deepens this classical paradigm. In Part~1, we tackle list-coloring problems in which the number of colors available to each vertex $v$ depends on its degree, denoted $d(v)$, and the size of the largest clique containing it, denoted $\omega(v)$. We make extensive use of the probabilistic method in this part. We conjecture the ``list-local version'' of Reed's Conjecture, that is every graph is $L$-colorable if $L$ is a list-assignment such that $$|L(v)| \geq \lceil (1 - \varepsilon)(d(v) + 1) + \varepsilon\omega(v))\rceil$$ for each vertex $v$ and $\varepsilon \leq 1/2$, and we prove this for $\varepsilon \leq 1/330$ under some mild additional assumptions. We also conjecture the ``$\mathrm{mad}$ version'' of Reed's Conjecture, even for list-coloring. That is, for $\varepsilon \leq 1/2$, every graph $G$ satisfies $$\chi_\ell(G) \leq \lceil (1 - \varepsilon)(\mad(G) + 1) + \varepsilon\omega(G)\rceil,$$ where $\mathrm{mad}(G)$ is the maximum average degree of $G$. We prove this conjecture for small values of $\varepsilon$, assuming $\omega(G) \leq \mathrm{mad}(G) - \log^{10}\mathrm{mad}(G)$. We actually prove a stronger result that improves bounds on the density of critical graphs without large cliques, a long-standing problem, answering a question of Kostochka and Yancey. In the proof, we use a novel application of the discharging method to find a set of vertices for which any precoloring can be extended to the remainder of the graph using the probabilistic method. Our result also makes progress towards Hadwiger's Conjecture: we improve the best known bound on the chromatic number of $K_t$-minor free graphs by a constant factor. We provide a unified treatment of coloring graphs with small clique number. We prove that for $\Delta$ sufficiently large, if $G$ is a graph of maximum degree at most $\Delta$ with list-assignment $L$ such that for each vertex $v\in V(G)$, $$|L(v)| \geq 72\cdot d(v)\min\left\{\sqrt{\frac{\ln(\omega(v))}{\ln(d(v))}}, \frac{\omega(v)\ln(\ln(d(v)))}{\ln(d(v))}, \frac{\log_2(\chi(G[N(v)]) + 1)}{\ln(d(v))}\right\}$$ and $d(v) \geq \ln^2\Delta$, then $G$ is $L$-colorable. This result simultaneously implies three famous results of Johansson from the 90s, as well as the following new bound on the chromatic number of any graph $G$ with $\omega(G)\leq \omega$ and $\Delta(G)\leq \Delta$ for $\Delta$ sufficiently large: $$\chi(G) \leq 72\Delta\sqrt{\frac{\ln\omega}{\ln\Delta}}.$$ In Part~2, we introduce and develop the theory of fractional coloring with local demands. A fractional coloring of a graph is an assignment of measurable subsets of the $[0, 1]$-interval to each vertex such that adjacent vertices receive disjoint sets, and we think of vertices ``demanding'' to receive a set of color of comparatively large measure. We prove and conjecture ``local demands versions'' of various well-known coloring results in the $\omega, \Delta, \chi$ paradigm, including Vizing's Theorem and Molloy's recent breakthrough bound on the chromatic number of triangle-free graphs. The highlight of this part is the ``local demands version'' of Brooks' Theorem. Namely, we prove that if $G$ is a graph and $f : V(G) \rightarrow [0, 1]$ such that every clique $K$ in $G$ satisfies $\sum_{v\in K}f(v) \leq 1$ and every vertex $v\in V(G)$ demands $f(v) \leq 1/(d(v) + 1/2)$, then $G$ has a fractional coloring $\phi$ in which the measure of $\phi(v)$ for each vertex $v\in V(G)$ is at least $f(v)$. This result generalizes the Caro-Wei Theorem and improves its bound on the independence number, and it is tight for the 5-cycle.