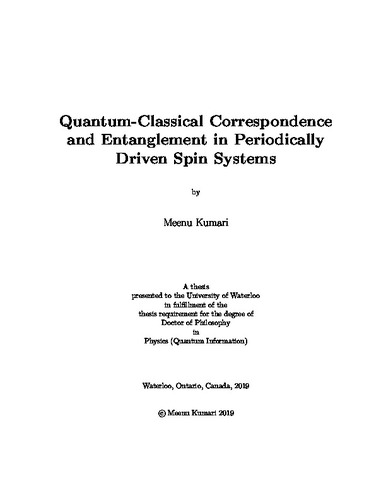 This dissertation sets out to examine some fundamental open questions in quantum physics regarding quantum-classical correspondence in regular versus chaotic systems. Specifically, we study these questions using approaches in quantum information science in an experimentally realized textbook model of quantum chaos - the quantum kicked top (QKT). The effect of classical chaos on the generation of entanglement in spin systems has been a field of active research for a couple of decades. Whether high entanglement in these systems is a hallmark of chaos or not remains a widely debated topic. We explain the connection between entanglement and chaos in spin systems and resolve previous conflicting results. The previous studies have mostly drawn conclusions from numerical work on a few initial states in regular versus chaotic regions. We instead focus on stable and unstable periodic orbits because chaos emerges around unstable periodic orbits. We first propose a new set of criteria for determining whether quantum evolution will correspond to the classical trajectory in a localized manner at stable periodic orbits in periodically driven systems. These criteria can be used to calculate the quantum numbers that will lead to quantum-classical correspondence even in a deep quantum regime, and thus to quantify the well-known Bohr correspondence principle. Next, we analytically show a direct connection between entanglement generation and a measure of delocalization of a quantum state in spin systems. More concretely, we describe a method to calculate an upper bound on entanglement generation in any bipartition of spin systems, where the upper bound is a function of trace distance between the evolved state and the most localized classical-like separable states. This method along with our criteria for localized evolution enables us to explain the behaviour of entanglement in both deep quantum and semiclassical regimes for regular as well as chaotic regions. Hence, our analysis resolves the long-standing debates regarding the connection between classical chaos and quantum entanglement in deep quantum and semiclassical regimes. In addition to the study of entanglement, we perform the first study of nonlocality, and the effect of chaos on its generation in the QKT. Since nonlocality and entanglement are inequivalent quantum resources, the effect of chaos on nonlocality merits an explicit study. Violations of Bell inequalities in the presence of spacelike separation among the subsystems imply nonlocality - meaning nonlocal correlations between subsystems of the total spin system. We show that the QKT evolution can lead to states that violate multiqubit Bell inequalities and hence provides a deterministic method to prepare nonlocal quantum states. Our numerical results suggest a correlation between delocalized evolution of a pure quantum state and generation of nonlocality in the quantum state. We further demonstrate that dynamical tunnelling - a classically forbidden phenomenon - in the QKT leads to the generation of Greenberger-Horne-Zeilinger (GHZ)-like states for even numbers of qubits. We analytically prove that these states are maximally nonlocal. On the other hand, we numerically show that any reduced state of the QKT obtained by tracing out a subsystem of the total spin system does not violate Bell inequalities. We provide an analytical explanation of the numerical results for $2-$qubit reduced states by formulating and proving two general theorems regarding $2-$qubit Bell inequalities. These theorems imply that any $2-$qubit mixed state having a symmetric extension or symmetric purification cannot violate the Clauser-Horne-Shimony-Holt inequality. This highlights fundamental connections between two important and distinct concepts in quantum information science - Bell inequalities and symmetric extension of quantum states. Apart from providing deeper insights into the fundamental questions of quantum-classical correspondence and new approaches to analyze quantum chaos, the methods developed in this thesis can be used to design quantum systems that can efficiently generate entanglement and nonlocality. Thus, our results could have interesting applications in quantum computing and quantum information science.