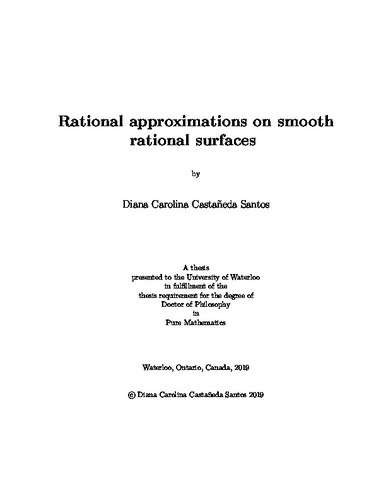 In this thesis, we study a conjecture made by D. McKinnon about rational approximations to rational points in algebraic varieties. The conjecture states that if a rational point P on a variety X lies on a rational curve, then the best approximations to P can be chosen to lie along a rational curve on X. According to the conditions of the conjecture, it is natural to study this problem on algebraic varieties that contain a dense subset of rational points. Motivated by this remark, we study the conjecture on smooth rational surfaces, which not only contain a dense set of rational points, but also their classification is well understood. Given a point P on an algebraic variety and an ample divisor D, the approximation constant measures how well P can be approximated by rational points on the variety, with respect to a height function associated to D. In the study of the conjecture, it became clear that if a curve C contains the best approximations to P with respect to ample divisors D and D', then C turns out to be also a curve containing the best approximations for any divisor that is a linear combination of D and D'. This property motivated the study of the nef cone of the algebraic variety. Every ample divisor belongs to the interior of the nef cone and can be written as a linear combination of the generators of the nef cone. By an exhaustive study of the effective and nef cones on a smooth rational surface, it is possible to find a curve that contains the best approximations to the point P with respect to an ample divisor, which can be written in terms of the generators of the nef cone. In this work we use the fact that a smooth rational surface is obtained by a finite number of blow-ups of a Hirzebruch surface or of the projective plane. The Hirzebruch surfaces are equipped with morphisms to the projective line and to cones in some projective space. The study of the fibres of these morphisms provide good candidates of curves with best approximations and we rely on them to prove the conjecture for these cases. We review the conjecture proved by McKinnon in the case of smooth rational surfaces of Picard rank 4. We explore some of the examples in this case to present the techniques using the nef cone of the variety, and then we extend the result for surfaces of bigger Picard ranks. Finally, we extend the result to surfaces obtained by blowing up an arbitrary number of times on smooth points of the reducible fibre of the map to the projective line.