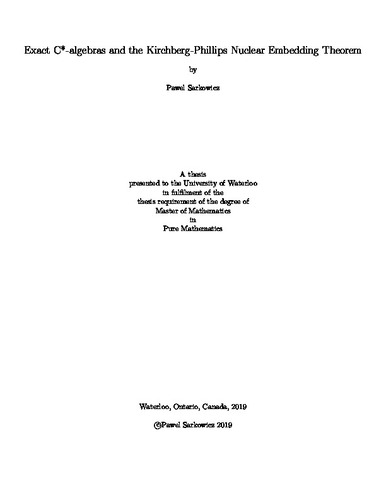 A C*-algebra A is exact if the functor A ⊗ min (·) preserves short exact sequences. This is equivalent to the algebra A having a nuclear faithful *-representation. Exact C*-algebras are a class of C*-algebras which is much more broad than the class of nuclear C*-algebras; exactness passes to subalgebras. This property was studied in great detail by Kirchberg and Wassermann in the early 90’s, and is still interesting today, for example in the study of exact groups. Exposition will be given to several results and characterizations related to exact C*-algebras. We begin by examining certain C*-algebras which play a tremendous role in several characterizations of exactness in the separable case. The first being the CAR algebra, which is the UHF algebra corresponding to the infinite tensor product of M 2 . The second is a family of C*-algebras originally introduced by Cuntz in [9], which are unital, simple C*-algebras generated by isometries which satisfy a certain relation. We then proceed to explore exact C*-algebras, initially through the exposition given by Brown and Ozawa in [6], and then through the work of Kirchberg and Wassermann. Kirchberg classified the separable exact C*-algebras as those that are subquotients as the CAR algebra in [18], and Wassermann gave his own proof, the one we choose to follow, in [33]. We finally examine unital, simple, purely infinite C*-algebras and their approximation properties in order to give a proof of the famous Kirchberg-Phillips nuclear embedding Theorem, as in [19]. This thesis follows work that was done in a previous USRA term (Winter 2018), supervised by Laurent Marcoux. During that term I studied nuclear C*-algebras, and the fact that they are a class of C*-algebras with a positive solution to Kadison’s similarity problem, of which an exposition can be found in [25].