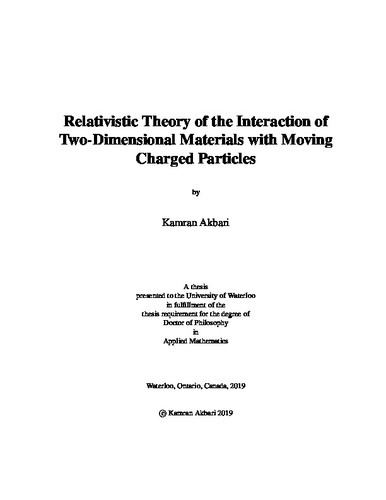 Prompted by the recent surge of interest in integrating atomically thin layers of conducting materials into nanophotonic and nanoplasmonic devices; we propose, in this thesis, a theoretical framework to analyze the interaction of externally moving charged particles with twodimensional (2D) materials. The interactions of 2D materials with externally moving charged particles in the context of electron energy loss spectroscopy (EELS) has become a very popular experimental technique for exploring the plasmon excitations in 2D layered specimens over a broad range of frequencies. On the other hand, the technological need for a stable and tunable source of terahertz (THz) radiation has inspired researchers to explore the electromagnetic radiation from a family of 2D materials, induced by their interaction with fast charged particles. We present a fully relativistic analysis of the energy loss of a charged particle traversing such layers. We distinguish between two contributions to this process: (i) the energy deposited in the layers in the form of electronic excitations (Ohmic losses), which include excitation of 2D plasmon polariton (PP) modes, and (ii) the energy emitted in the far-field region in the form of transition radiation. Owing to the proposed theoretical framework, we study various structures consisting of isotropic and anisotropic conducting and semiconducting sheets with different trajectories of the incident charged particles, including single and multiple parallel layers of graphene under normal incidence of charged particles and single-layer graphene and phosphorene under oblique incidence, in broad ranges of frequency, incident particle’s speed, and its angle of incidence relative to the layers. Suitable models for the 2D conductivity of each layer are chosen to represent: (a) excitation of the Dirac PP (DPP) mode in doped graphene in the THz range, (b) interband transitions in graphene in the range from infrared to ultraviolet frequencies, and (c) hyperbolic plasmon modes in doped phosphorene at the THz to mid-infrared frequencies. Among other findings, we observe that, for multilayer graphene, strong asymmetries arise in the Ohmic losses and in the radiation spectra with respect to the direction of motion of the incident particle. These asymmetries are explained by hybridization taking place between DPPs in different layers, which is found to be strongly affected by the interlayer distances and the differences in the doping densities of those layers. In addition, we explore the possibility of exciting the so-called transverse plasmon mode in graphene as well as the directionality of exciting anisotropic plasmons in phosphorene by an obliquely incident charged particle. Our findings may help in the ongoing studies of plasmon excitations in 2D materials via EELS, as well as in exploring the possibility of designing a THz radiation source using an electron beam.