Rethinking drinking: an exploration of the discourses surrounding binge-drinking among first-year university students that live in residence 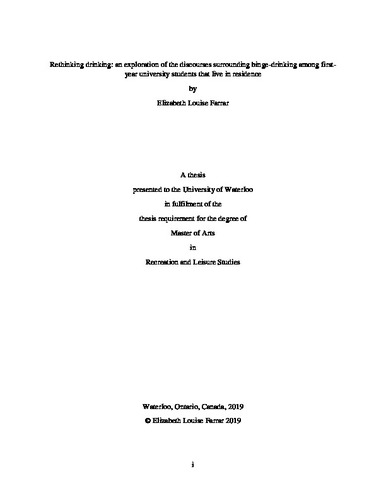 Over one-third of Canadian university students engage in heavy drinking, with even higher rates reported amongst those who live in on-campus residences (CAMH 2004; Kypri, Paschall, Langley, Baxter & Bourdeau, 2010). At the time of this study, there was very little recent research to demonstrate the prevalence of alcohol consumption amongst young adults in postsecondary education in Canada. The purpose of this narrative inquiry is to deconstruct the experiences of binge-drinking among first-year undergraduate students at a Canadian university. Data was collected through interviews with the nine participants, allowing the participants to share their stories of drinking and understandings of the ways that social norms influenced their decisions. The interview data was then analyzed to highlight the discourses of drinking that exist within the university residence context, the ways that the discourses are disseminated and disciplined among first-year students, and the ways that first-year students negotiate these discourses of drinking. After analyzing the data, I rewrote the stories shared by the nine participants into three narratives. These three narratives all tell the stories about one Friday night in residence but are written from three perspectives to demonstrate the varying experiences and understandings of the discourses as described by the participants. The thesis concludes with a discussion on the ways that drinking in residence is understood as safe. Understanding drinking in residence as safe manifested in several ways throughout the interviews, highlighting the ways that certain policies and practices further normalize drinking as an acceptable part of the university student experience.