Contextual cues as modifiers of cTBS effects on indulgent eating 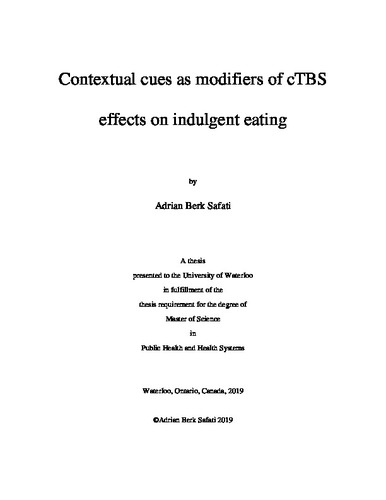 Background: Prior studies have found that continuous theta burst stimulation (cTBS) targeting the left dlPFC results in reliable increases in consumption of calorie-dense food items. However, it is not known to what extent such effects are modified by cues in the immediate eating environment. Tempting environments (i.e., those saturated with appetitive eating cues) may lead to more reliance on cognitive control networks involving the dlPFC, thereby enhancing cTBS effects on indulgent eating. Objective/Hypothesis: The objective was to examine the extent to which cTBS effects on indulgent eating would be modified by contextual cues. It was hypothesized that cTBS effects would be stronger in the presence of facilitating cues. Methods: Using a single-blinded between-subjects factorial design, 107 TMS-naïve adults were randomly assigned to one of four conditions: 1) active cTBS + facilitating cues, 2) sham cTBS + facilitating cues, 3) active cTBS + inhibiting cues, 4) sham cTBS + inhibiting cues. Following stimulation participants completed a flanker paradigm and a taste test during which quantity consumed was assessed surreptitiously. Results: Findings revealed a significant interaction between stimulation and cue type (F(1,102)=6.235, p=.014), such that cTBS resulted in increased food consumption (compared to sham) in the presence of the facilitating cue but not in the presence of the inhibiting cue. Moderated mediational analyses showed selective mediation of cTBS effects on consumption through cTBS attenuation of flanker interference scores. Conclusions: The effects of cTBS on indulgent eating are strengthened in the presence of facilitating cues. Methodologically speaking, facilitating cues may be a functional prerequisite for exploring cTBS effects on eating in the laboratory. Substantively, the findings also suggest that facilitating cues in the eating environment may amplify counter-intentional food indulgence in everyday life via cognitive control failure.