The Parkdale Public Library is for Us 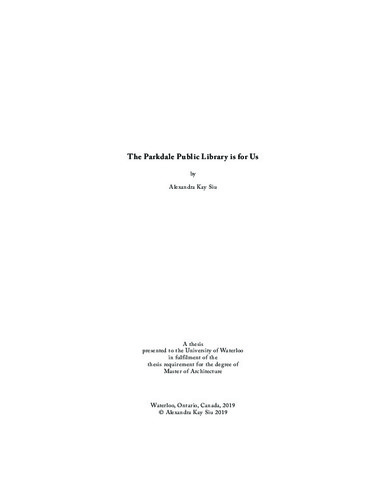 The Parkdale Public Library in Toronto is an illustration of what remains of democracy today. While government is deeming libraries irrelevant with their funding cuts, and privatized cafes are taking over as ‘public’ social spaces for the middle-class, the Parkdale Public Library still exists as a needed free resource for everyone. In this library, away from the rest of the city, two unsuspecting individuals from different walks of life meet in line while waiting for the computers, and a senior woman is reading her poetry aloud to a crowd of friends, community, and strangers. This thesis investigates public neighborhood libraries as an opportunity for the democratic engagement of individuals at a time when we hardly look a stranger in the eye. It observes the relations between library patrons in order to question the current limits of our civil interactions. New design possibilities are then explored in an attempt to find a building form to better reflect public life within Parkdale Public Library. The research culminates in a design proposal for a re-imagined neighbourhood library in Parkdale, Toronto and takes a stand for libraries as vital interior public spaces that are currently going unnoticed. A critical analysis of Toronto Public Libraries, successful library precedents, and the site context of Parkdale help to inform the design. Derived from these analyses is a proposal of a new library that would signal a world of humanity inside- one which is free, expressive and empathetic. The new proposal makes known the vitality of library spaces relative to everyone’s lives. The central design method draws on observations made at Parkdale Public Library as a means for creating an environment that better encourages self-expression and engagement with others. The design will fulfill the functional requirements of the library with crucial design elements that respond to the particular characteristics of Parkdale and its people. It proposes the utilization of additional programming, spatial framing and spatial anchors to influence and highlight moments of connection between people of blatant or intimidating difference. Ultimately, the architecture is positing that a new material aesthetic reality is needed to invite the public in, so that they may come to know the important reality of tolerance, solidarity and genuine self-expression happening inside our libraries.