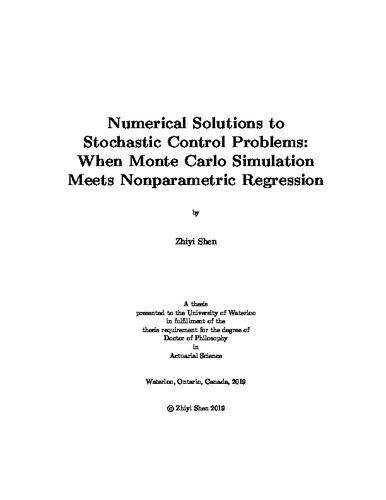 The theme of this thesis is to develop theoretically sound as well as numerically efficient Least Squares Monte Carlo (LSMC) methods for solving discrete-time stochastic control problems motivated by insurance and finance problems. Despite its popularity in solving optimal stopping problems, the application of the LSMC method to stochastic control problems is hampered by several challenges. Firstly, the simulation of the state process is intricate in the absence of the optimal control policy in prior. Secondly, numerical methods only warrant the approximation accuracy of the value function over a bounded domain, which is incompatible with the unbounded set the state variable dwells in. Thirdly, given a considerable number of simulated paths, regression methods are computationally challenging. This thesis responds to the above problems. Chapter 2 develops a novel LSMC algorithm to solve discrete-time stochastic optimal control problems, referred to as the Backward Simulation and Backward Updating (BSBU) algorithm. The BSBU algorithm has three pillars: a construction of auxiliary stochastic control model, an artificial simulation of the post-action value of state process, and a shape-preserving sieve estimation method which equip the algorithm with a number of merits including obviating forward simulation and control randomization, evading extrapolating the value function, and alleviating computational burden of the tuning parameter selection. Chapter 3 proposes an alternative LSMC algorithm which directly approximates the optimal value function at each time step instead of the continuation function. This brings the benefits of faster convergence rate and closed-form expressions of the value function compared with the previously developed BSBU algorithm. We also develop a general argument for constructing an auxiliary stochastic control problem which inherits the continuity, monotonicity, and concavity of the original problem. This argument renders the LSMC algorithm circumvent extrapolating the value function in the backward recursion and can well adapt to other numerical methods. Chapter 4 studies a complicated stochastic control problem: the no-arbitrage pricing of the “Polaris Choice IV" variable annuities issued by the American International Group. The Polaris allows the income base to lock in the high-water-mark of the investment account over a certain monitoring period which is related to the timing of the policyholder’s first withdrawal. By prudently introducing certain auxiliary state and control variables, we formulate the pricing problem into a Markovian stochastic optimal control framework. With a slight modification on the fee structure, we prove the existence of a bang-bang solution to the stochastic control problem: the policyholder's optimal withdrawal strategy is limited to a few choices. Accordingly, the price of the modified contract can be solved by the BSBU algorithm. Finally, we prove that the price of the modified contract is an upper bound for that of the Polaris with the real fee structure. Numerical experiments show that this bound is fairly tight.