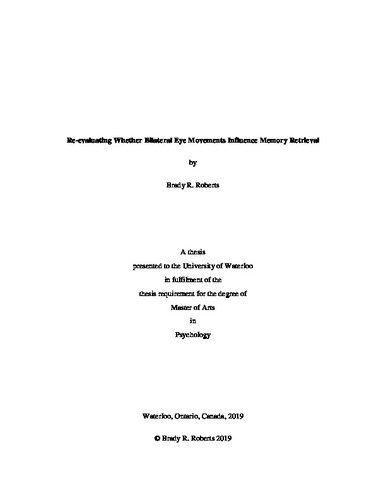 Updated version after second round of UWSpace comments. (921.1Kb)

Several recent studies have reported enhanced memory when retrieval is preceded by repetitive horizontal eye movements, relative to vertical or no eye movements. This reported memory boost has been referred to as the Saccade-Induced Retrieval Enhancement (SIRE) effect. Across a series of three experiments, memory performance was compared following repetitive horizontal or vertical eye movements, as well as following a control condition of no eye movements. In Experiment 1, we conceptually replicated Christman et al.'s (2003) seminal study, finding a statistically significant, albeit weak, SIRE effect. In Experiment 2, we sought to explore the generality of the effect by presenting to-be-remembered targets auditorily rather than visually during encoding. There was no evidence of a SIRE effect in this experiment: Bayesian statistical analyses demonstrated significant evidence for a null effect. For Experiment 3, we largely returned to the methodology of Experiment 1, except that now horizontal and vertical eye movement conditions were separated into two groups. We again showed no evidence of a SIRE effect, and again there was significant Bayesian evidence in favour of a null. Taken together, these experiments suggest that the SIRE effect as it has been reported in the literature is inconsistent at best or entirely spurious at worst.